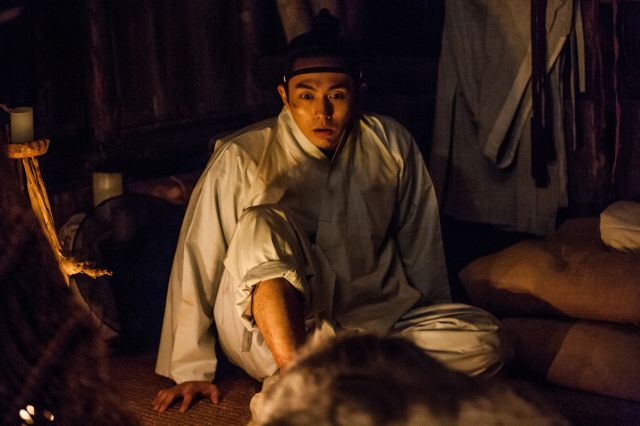 Am ominous opening titles informs us that in the distant future, the world is in ruins. Cut to a space elevator, which quickly escapes the planetary surface, arriving in celestial orbit with a terrifying and beautiful view of what lies beneath. This the cinematic power of the mere framing device of "Horror Stories"- The Girl from Mars. Director Min Gyoo-dong takes the throwaway portion of an anthology and turns it into something genuinely otherworldly and creepy. And the individual stories are just as good.

First up is Fox Valley by director Baek Sung-bin. In olden times, a couple of pursued travelers end up forced to take lodging at a mildly creepy house under the auspice of a bright red sky. From there the imagery gets progressively more shocking and weird. Scabs on slaves, worms under skin, twisting heads in the night, all punctuated by a constant fear of the unknown. Strictly speaking this is terror without context, but a good shock scare is always nice for a warmup.

The second piece, Road Rage by director Kim Sun, is more traditional horror. It doesn't even have any supernatural elements. It's just a story about a couple driving one night, interrupted sporadically either by annoying phone calls from a work or by an obnoxious giant truck that keeps pestering them. It's funny how even though "Horror Stories 3" starts out in space, it turns out that the freeway is the one place where no one can hear you scream.

The final story, Ghost in the Machine by director Kim Gok, marks a return to fear through imagery. In this case the imagery being a child robot which inevitably malfunctions. You know what's cute? A child pretending to be a robot. You know what's not cute? A child that convincingly looks partially robot acting like a robot, with a metallic voice and red fluid spewing around all over the place.

It's the imagery which really marks "Horror Stories 3" as something truly exceptional. I don't know whether they increased the budget compared to the previous two movies or if the directors just have better imaginations or what, but each story is like getting a firsthand look into a person's twisted, demented nightmares. There is no logic or reason to these spectres which invade the imagination and proceed to terrorize us just as much with the fear of what they will do as the reality of what they're actually planning to do.

The framing device, a conversation between two characters who aren't even human at all and view these stories from a completely different vantage point than we do, only makes that sick fear all the sweeter. It's very fair to find any movie, let alone an anthology, understand genre fundamentals as well as "Horror Stories 3" does. What the ideas lack in narrative innovation they more than make up for with sheer unadulterated fear. I constantly wanted this movie to end, yet in a perverse way I also wanted to see what maniacal image lurked behind the next scene. Now that's horror done right.