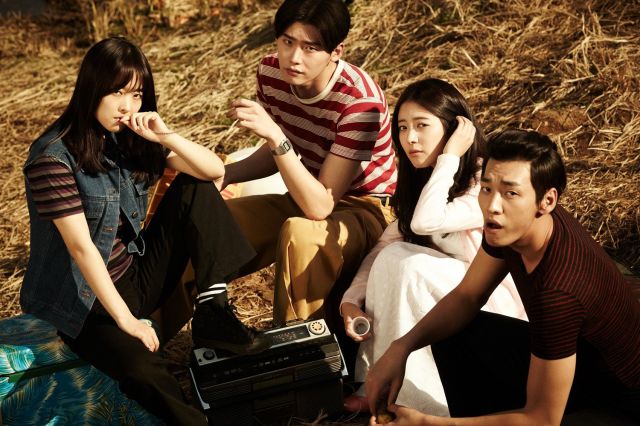 It's the eighties in rural Chungcheong. These are violent times- remember that there was a tight-fisted dictatorship going on. If any message is clearly imparted to the teen students here, it's that violence is a good way of letting off youthful energy. That's certainly the opinion of Yeong-sook, at any rate. Park Bo-young infuses the perpetually angry, mean looking young woman with a sense of brimming rage. She's straight up looking for fights to get into. It would be funny if she wasn't so scary-looking.

Yeong-sook sets her sights on Joong-gil (played by Lee Jong-suk), a young man who has made it his goal to kiss every girl in the class, and has developed all manner of smooth talking and magic fingers to bring out the aura of Casanova that lies in his soul. What I really loved about the characterization here is that Joong-gil is not, in fact, that amazingly suave. We consistently see him as a dumb teenager with dumb teenage ideas about romance that work mainly because his targets are teenage girls who are about as clueless about this stuff as he is. Ah, the ignorance of youth, those lucky few blessed enough not to know how dorky they look.

If nothing else "Hot Young Bloods" makes excellent use of its eighties settings. Not just in the corporal militaristic relationship between the school gangs, not just in how the characters learn about the opposite sex from reading magazines, but the music too is brilliant. The soundtrack really sells the film as being from a time period about rage and teen spirit, where social interaction is crude because that's how we do it in the eighties.

Storyline wise this is also clearly a movie about teenagers, in the sense that they're so bad about communicating their feelings it's never totally clear what they want. It takes some time, for example, to establish whether Yeong-sook actually likes Joong-gil romantically or is sabotaging him out of spite for being a heartbreaker. The distinction is obvious to her, of course, but we (and Joong-gil) can't see inside her head. Joong-gil as well seems to have no idea whether he actually likes a girl or just thinks she's another conquest, and has difficulty figuring out what they want when his smoothness and magic fingers fail him.

The movie's first half is its strongest in terms of replicating this level of kinetic energy. For all their general quirks and failures the characters in "Hot Young Bloods" are very good about being able to take action. Well, for awhile anyway. The second half is a bit weaker in parts, as our heroes slow down and start to face genuine danger and fear. The conflict shifts away from general teen insecurities to exisential worries as the characters starts to redefine themselves completely in that ever elusive search for adulthood.

It's boring compared to the antics up until that point. But luckily "Hot Young Bloods" is still able to deliver on a powerful climax in an impossible situation where, yes, only a teenager with the boiling fury of youth could possibly be crazy enough to try and fight his way out. This movie is filled with fun good stuff- it's a heavy dose of action and comedy rolled up in a story about growing up in the days before the Internet.