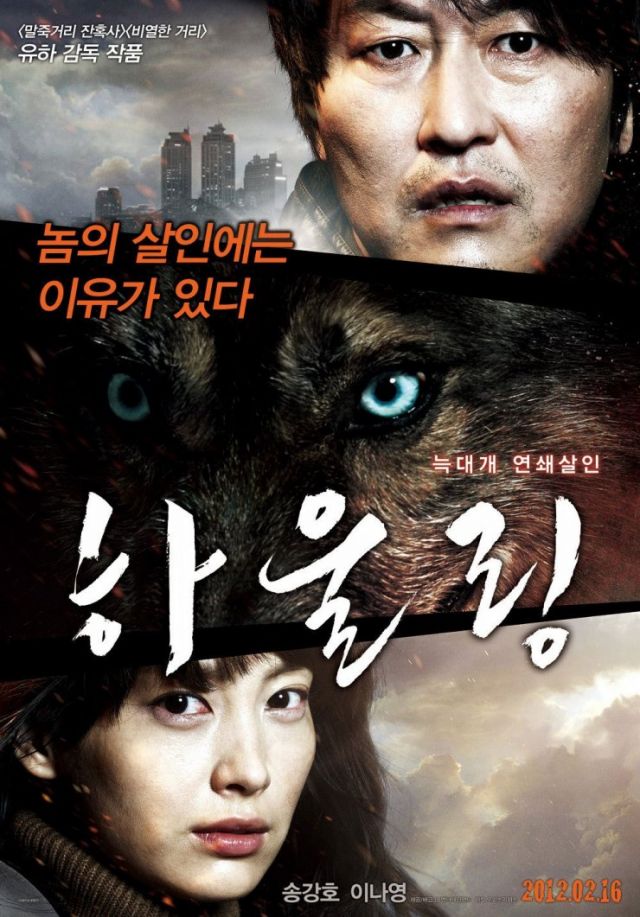 Director: Yoo Ha ("A Frozen Flower" and "A Dirty Carnival")

Director Yoo Ha's last film, "A Frozen Flower", was a rich and compelling and it caught my attention when I was first getting into Korean cinema. It had an interesting mix of contemporary social issues painted through a historical lens, a combination that I always thoroughly enjoy when done right. It was close to four years after "Frozen Flower" that he released "Howling", a mystery drama that boasts some big name actors in the form of Song Kang-ho ("Secret Reunion", "The Host" and "Memories of Murder") and his co-star Lee Na-young ("Dream" and "Someone Special"). Together they made for some interesting on-screen chemistry, but was Yoo Ha able to give them enough to work with in his one?

From its trailer, "The Howling" seemed like a film that didn't take itself very seriously. A 'wolf dog' is causing havoc in Seoul and veteran detective Jo Sang-gil (Song Kang-ho) and his lightweight female partner (Cha Eun-yeong played by Lee Na-young) are paired together to get some answers for a strong of odd and disturbing murders. However, inter-departmental politics come into play as the rest of the investigation team seem unable to accept this young women into their private pack. Police professionalism is never one of Korean cinema's motifs, and "Howling" makes no effort to step out of line.

Where is does make a statement, however, is through Eun-yeong's fight to be accepted into the patriarchal task force. Her presence distracts and causes conflict within the team as they continually undermine her abilities and insight into the case. This, strangely enough, is actually one of the film's primary focus points; sadly though, it was probably one better worked into a plot with more focus and bite that Yoo Ha was able to deliver in "Howling".

The film has a few narrative red herrings that misguided beyond their literary function. A struggling young female detective, a rampant wolf dog, supposed spontaneous combustion, and a child abuse story all seemed to trip over themselves as Yoo Ha grasped for some semblance of a golden thread to connect them. The plot was rigged with some poor story hinges and false climaxes the rather interesting parallel between Eun-yeong and this mysterious wolf dog is almost lost entirely. A shame really, as there was a great seed of an idea there, one that perhaps got bogged down by too many complications and crossovers. The film did very much have its moments, such as when Eun-yeong gets trapped in the basement of burning house alongside the killer K9 she'd been tracking. It was a great opportunity for some interesting, and much needed, thematic connections between this misunderstood dog and Eun-yeong's own need for acceptance with the police pack. Unfortunately, those links felt forced and, even in retrospect, lacked substances and consistency.

Song Kang-ho may have been the big player in all this, but it was really Lee Na-young's character that was the interesting one. Kang-ho didn't shame his brilliant career though; his performance was what you would expect from one of Korea's top actors. His character's transformation, from arrogant misogynist to sympathetic hero, all pivots around his relationship with Eun-yeong as they both grow and build-up their relationship. The supporting cast was all a bit stale and cliché, nothing interesting there and definitely nothing to help bolster the film's flaky sense of direction.

As you can see "Howling" did not impress much. Perhaps I enjoyed Yoo Ha's previous works too much and expected greatness where tempered enthusiasm would have sufficed. Either way, this was a sharp step backwards from what we known Yoo Ha is capable of.