[HanCinema's Film Review] "I Am Hopeman" 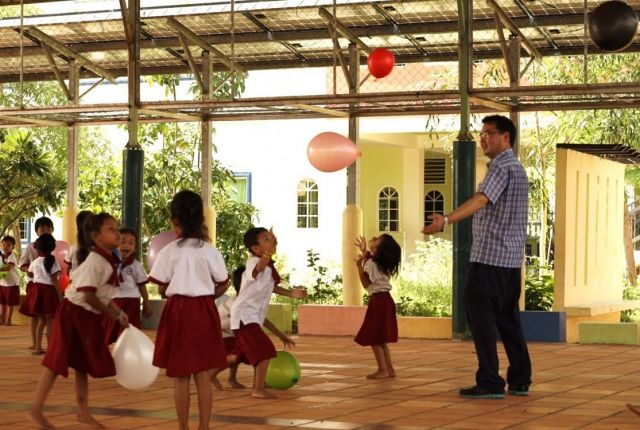 The main audience for "I Am Hopeman" is just Korean Presbyterian laypeople. The documentary explains what their donation money to the Cambodia Mission has been doing. It's a progress report that's been quite a long time in the making. When director Na Hyun-tae started out, the Hope School was just an elementary school. The main struggle was getting students to attend at all. The documentary ends with a graduation ceremony of their first high school class.

When staffpeople of the school make their pitch to parents, daily economic reality is the main factor they have to fight against. The children themselves are skeptical- one big selling point is that they do not need to be at school all day, which means they can still spend some time searching for recyclable trash at the dump. It's gratifying watching the staff, through sheer effort, making enough in-roads that upgrading the school becomes a full-on community project, because that's how good their reputation has become.

It feels odd calling this a religious mission, though, since aside from an out of place Passion Play near the end, the school's operations are largely secular. There's reading, writing, and arithmetic, even to teenagers who lack the ability to read at a grade school level. Students are encouraged to think in terms of dreams, of what they want to do for the future. Family planning is discussed, as students are encouraged to marry and have children late to help break the cycle of poverty.

There's no sense of judgment or negativity. Another late scene features a mother who works at a bar, not as a bartender or a waitress, but as a woman whose job it is to have drinks with customers. Ugh. It's a fitting contrast to earlier exposition of younger girls with the same job. Neither the camera, nor the churchpeople, go after the sinner in any way. The tone is always, these poor girls, they just want better lives, and we just want to help them.

The dedication is quite sincere. The school's headmaster suffers from Parkinson's, and we frequently see him helpless on the ground, even as children play around him, trying to recover from a relapse. Wouldn't he be better off resting at home? Well no, because his purpose in life, and his family's purpose is to provide a hopeful future for the students at the school. Their happiness is his best medicine. That the headmaster and his family are steadfast to this mission even in the face of tragedy is quite touching. I hope they keep up the good work.

"I Am Hopeman" is directed by Na Hyun-tae.

"[HanCinema's Film Review] "I Am Hopeman""
by HanCinema is licensed under a Creative Commons Attribution-Share Alike 3.0 Unported License.