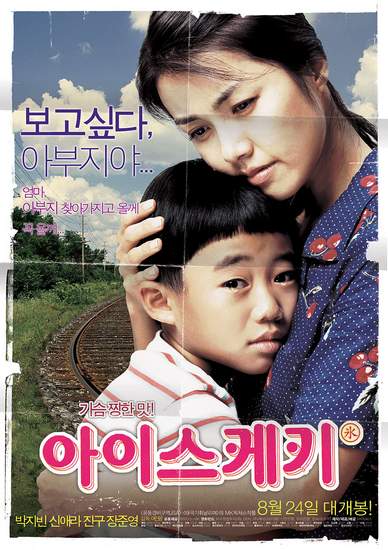 Fifty years ago South Korea was, by any metric, a third world country ranking near the bottom of the scale in every appreciable metric. And yet even here, there's a sweet wafting nostalgia when it comes to childhood experiences. Like having a mother whose employment depends on illegal enterprises, living in a dingy town with little hope of economic opportunity, and being so hard up for food that the high-grade stuff like eggs are delicious even when covered in dirt.

I suppose when I phrase it like that the sixties in South Korea don't really sound all that great. "Ice Bar" (literally "Ice Cake" which is how the titular treats are pronounced in Korean) takes all these elements that sound extremely bleak and disparate abstractly and turn them into a fun, heartwarming movie about growing up- the joy of grandpa's stories without having to hear him belittle you for having it easy.

Young-Rae (played by Park Ji-bin) is a kid whose doing all right for himself, though he certainly could be doing better. His main daily annoyance is kids teasing him for not having a father. When Young-Rae discovers that his father is alive (and even has a name), he soon finds himself in a determined effort to get to his father's doorstep and get some sort of explanation of, well, something.

Through every step of his quest, Young-Rae has to fight for every step he makes closer to the goal of reuniting with his father. While other characters do offer him help, it's always clear that without Young-Rae's own personal drive this entire mission would go nowhere. As coming-of-age stories go, "Ice Bar" is strongest when it recognizes that the main part of life which defines transition to adulthood is the realization that we have agency. Young-Rae is never meaningfully independent, but he becomes his own person over the course of this movie as he constantly moves toward the event that will change his life forever.

In terms of bad points, there really aren't any. At certain points "Ice Bar" veers a little too close to grandiloquent melodramatic flourishes, but none of these were quite strong enough to break my suspension of disbelief. The fact of the matter is, these characters live in a dangerous world. In many ways we're better off without it. And yet we still have the memories. In this way, "Ice Bar" does an excellent job analyzing nostalgia objectively. While many sequences are blatant appeals to emotion, that's pretty much what nostalgia is and why it appeals to us to begin with.

"Ice Bar" is a movie that provides all the right narrative flourishes to appeal to kids, while still having the right amount of deliberate attention to background details to make sure that adults pay attention, if not to the story, then at least to the environment. To someone who's not Korean and did not grow up in the 1960's, well, this effect is a little difficult to measure. But writing as someone who does not meet either of these categories, I liked this movie. And I think anyone going into it with an open mind and reasonable expectations will, too.