[HanCinema's Film Review] "If You Were Me" 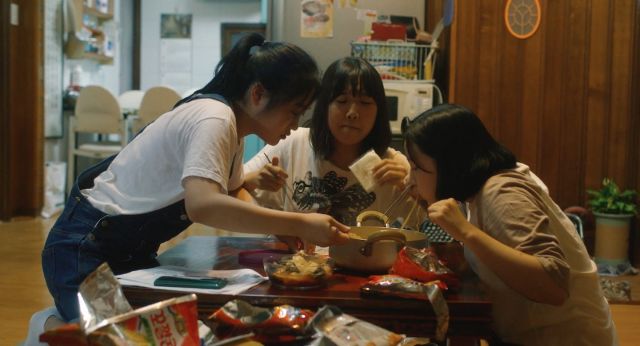 Funded by the National Human Rights Commission of Korea, the "If You Were Me" omnibus series of films always does a good job of making me ask questions. Such as, what exactly do these movies have to do with human rights? This time around the stories concern a high school girl separated from her beloved tteokbokki, a man who gets who gets increasingly embroiled in bizarre paranoid conspiracies, and a woman who...a woman who...what exactly was the third film even about anyway?

Soju and Ice Cream, by director Lee Kwang-kuk, is allegedly a story about Se-ah (played by Park Joo-hee), a woman who accepts a peculiar request regarding soju and ice cream, and quickly proceeds to get embroiled in a series of odd conversations about nothing. All right, all right, it does all kind of fit together once you figure out the gimmick, but the day I watched "If You Were Me" was not a day I was much in the mood for gimmicks. Sometimes I just want to watch a movie rather than put together a jigsaw puzzle, you know?

Speaking of which, The Megalomaniacs by director Shin Yeon-shick deals with Woo-min (played by Kim Dong-wan), a man who ends a weeklong relationship on the lame excuse of the fear he's being followed. Then we get to meet the kind of weird people who would be interested in following a boring normal person like Woo-min. The Megalomaniacs is about as incomprehensible as Soju and Ice Cream. Although to be fair, it did get me to laugh several times during the hexalingual dialogue sequence, which as far as I'm concerned exists for the sole purpose of setting up a large number of nonsensical puns.

That much is probably to be expected from Lee Kwang-kuk and Shin Yeon-shick, though. Check out their resumes and you'll find that these men have made a niche for themselves directing independent movies that prioritize cleverness over lucidity. Perhaps I'm being unfair, although I doubt my opinion will change unless someone can explain what specifically is great about their movies without using generic superlatives.

Anyway, the first piece, We Have the Right to Eat Tteokbokki by director Choi Ik-hwan, is about the most important human right of all- tteokbokki. Which I don't actually even like that much but whatever, the kids are into it, and that's the important manic energy which fills the piece. Imagine the sheer desperation of a teenage girl separated from her favorite food, and the crazy places this takes her imagination, and boom. That's what you get.

It kind of figures that even though We Have the Right to Eat Tteokbokki was my favorite piece, the transparent nature of the story is such that all it can really be described as is fun. Taken in concert with the more fragmented design of the two proceeding stories, that ends up turning "If You Were Me" into a case of the good, the weird, and the weird. Not the best use of time if you're trying to learn more about human rights, but entertaining nonetheless.

"[HanCinema's Film Review] "If You Were Me""
by HanCinema is licensed under a Creative Commons Attribution-Share Alike 3.0 Unported License.