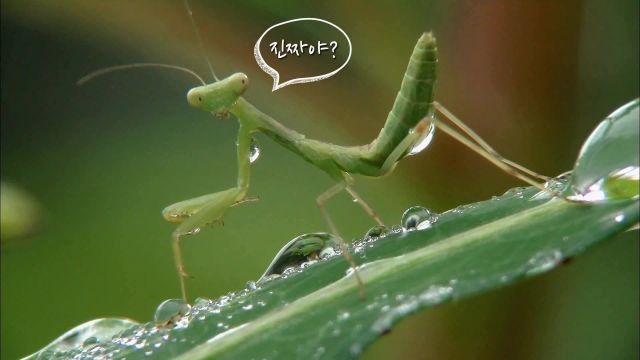 Bugs are pretty scary, and "Insect Kingdom 3D" doesn't shy away from that. This is basically a snuff documentary- repeatedly, we watch insects going about their daily lives, looking for food to eat, and mostly this food is in the form of other weaker insects. Note that I did not write other smaller insects. This is because small insects are just as capable of horrific brutality as the rest of them. Word to the wise- don't mess with ants. They'll really screw you up. In gross, disturbing, horrifying ways.

But don't get the wrong idea about "Insect Kingdom 3D". This documentary was obviously intended for children, as the helpful voiceover constantly reminds us, with one adult and two kids providing a running color commentary about the bugs and the amazing fascinating activities that make up their daily lives. Although the anthropomorphization does get to be rather comical after a certain point. I don't think we can divide insects into tidy categories of good and bad when nearly all of them make their livelihood by keeping their prey alive as long as possible. Fresher meals that way.

This is an impressive documentary if only for sheer quantity of interesting entomological information shown in an engaging way. Yes, there are the standard insects we all know and love, like the dung beetle and the butterfly. There's weird ones, too, like the giant water bug that eats frogs. Yes, frogs. I'd tell you more, but a lot of the fun here is just wondering what strange insect will come out of the woodwork next.

The documentary's technique is also very good, relying heavily on time lapses to exposit the growth cycle of the nearby environment. It really brings attention to the fact that insects are to us, as mayflies. They go through a quick life cycle and breed fast. We never leave bugs only to come back to them later- the implication is always that one way or another they die as soon as the camera turns away.

If you're squeamish about death, though, the birth scenes are even worse. Gross little maggots, sometimes as many as a dozen at a time, come squirming out of their eggs at a small, barely perceptible pace. Then, through the magic of time lapse, we actually get to see them grow into something large and even more disgusting and scary looking. For an educational kids' documentary, there sure were a lot of parts I didn't want to look at the screen.

Still, think about when you were a kid. Remember what the coolest stuff was? It was the creepy squirming discoveries that made you want to gag, and then inevitably, you would come back for more. "Insect Kingdom 3D" replicates this feeling perfectly, creating a documentary that's obviously intended to be educational, but with just enough shock value that no kid in their right mind is going to want to stop watching. That's all a nature documentary can really aspire to anyway, and even if "Insect Kingdom 3D" lacks any real hook aside from the often ironic narration, it's pretty effective for what it is.