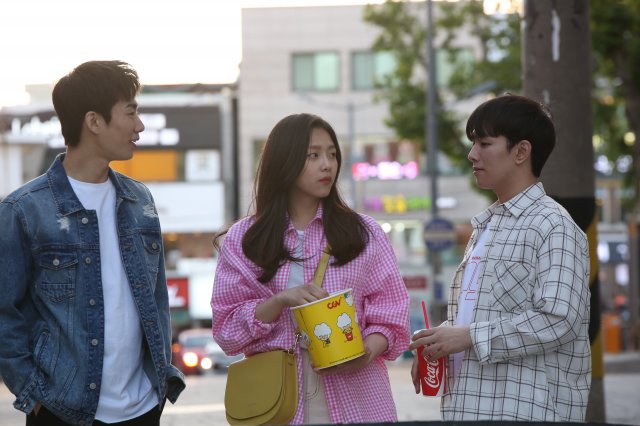 Chae-yeong (played by Jung Daeun) is a high school student who is a black belt in the offensive/defensive style of martial arts colloquially referred to throughout "Justice High" as the justice school of martial arts. While Chae-yeong is perpetually grumpy, and annoyed over having been forced to change schools, she still uses her skills as necessary. That's how she meets Jong-goo (played by Oh Seung-hoon), a bullied teenager who is...not her love interest?

While predictable in a lot of ways "Justice High" excels in its sense of genuine warmth and sympathy for its frequently oblivious high school characters. I loved how Jong-goo naturally follows Chae-yeong around like a cute little puppy dog, only relenting when she explains where she learned how to fight. Chae-young's dad Dong-pyo (played by Jung Eui-wook), is a man so passionate about teaching kids martial arts and justice it ended up destroying his marriage. Hence why Chae-yeong is so crabby.

But less than martial arts or action persay "Justice High" is really the story of how Chae-yeong, Jong-goo, and eventually apostate bully Hae-seong (played by Son Woo-hyun) become friends. I liked how all of their reasons for even needing friends were so distinct. Jong-goo is a reasonably pathetic loner. Hae-seong's friends are generally terrible bullies, and he's sick of them. Chae-yeong is incredibly cool yet also horribly aloof. I loved the scene where Jong-goo and Hae-seong struggle to come up with increasingly unsubtle hints that the three of them should really hang out together socially some time.

The overall chemistry in "Justice High" is excellent, even as it has no obvious purpose in the narrative. Observe the extended montage sequence that literally just demonstrates the passage of time, as our main characters have no real goal to speak of. We watch them train, and hang out, and eat black noodles several times in a row. They're bonding, not through overly sentimental plot hooks, but just by working together to learn martial arts in an after school program.

The action scenes are also surprisingly worthwhile and feature realistic skill progression. Chae-yeong, as the resident black belt, easily defeats anyone stupid enough to pick a fight with her. But I liked how in the climax Hae-seong does most of the work. Hae-seong, after all, had some prior fighting experience. Jong-goo, even after extended training, is still kind of a weiner. For their radically different skill levels all three leads work well together, and we can even see their distinct personalities well reflected in their fighting styles.

While a bit of a cheap production director Chae Yeo-joon even uses that to his advantage by using abrupt musical cues for scene transitions as a kind of a minor running gag. A lot of "Justice High" manages to elicit a smile by just being so gosh-darned cute, with random expectation breaking jokes sprinkled throughout being sold entirely on the strength of strong genre-appropriate performances from the cast. For a bunch of twenty-somethings the actors in "Justice High" are surprisingly convincing high school students.