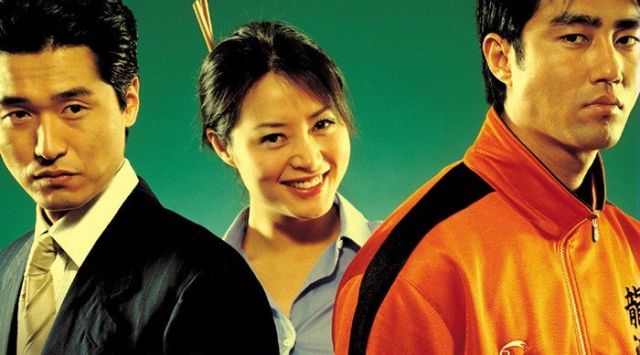 The Korean title of "Kick the Moon" is Silla By Moonlight, a reference to the classic Occupation era song which romanticized the Silla Kingdom. The reference is intended to be ironic, as "Kick the Moon" depicts modern day Gyeongju, the capital of the Silla Kingdom, as being a hotbed of loudmouthed gangsters who speak in thick dialect. The film opens up with a legendary riot as Seoul high school students on a graduation trip decide to show off their toughness by challenging Gyeongju residents to a giant street fight.

At the time Yeong-joon (played by Lee Sung-jae) was too humiliated to participate. So in the ten years since then, Yeong-joon compensated by moving to Gyeongju, becoming a teacher, constantly drinking soju, speaking an exaggerated version of the southeastern dialect, and beating up his students on the slightest excuse. To be fair, they are idiots, and their punishment is always well-deserved. Then the hero of the legendary riot, Gi-dong (played by Cha Seung-won), shows up to town on a different objective and so the bromantic comedy begins.

"Kick the Moon" does not have much plot to speak of. Gi-dong achieves his goal comically early. His rekindled friendship and rivalry with Yeong-joon so completely overpowers the the alleged story that by time we get to the climax Gi-dong has completely forgotten that he has actual gangster enemies. Admittedly, it helps that these antagonists are utter buffoons. The tendency of their leader to constantly get taken hostage is so goofy that it gets commented on.

And then there's Joo-ran (played by Kim Hye-soo), a ramen shop owner who naturally embodies aggressive southeastern Korean stereotypes- a trait that weirdly enough makes her attractive to both male leads. Although, Yeong-joon and Gi-dong are so obsessed with each other that at times Joo-ran just feels like a proxy for them to indirectly impress each other. One lovely scene in particular, taken from Joo-ran's point of view, showcases the absurdity of their squabbling about Joo-ran without actually paying attention to anything she's doing.

Such absurdities predominate the movie's many extended recurring gags. Characters of limited intelligence try to solve every problem they run into with brute force- and more often than not the bluffs fail because their opponents are too stupid to realize the danger of the situation. Repetitive tactics with themes such as dramatic kneeling in front of a speeding car, randomly shooting a gun in the air, or excessive weight lifting all prove powerless in the face of sheer immovable willpower.

If "Kick the Moon" sounds utterly ridiculous that's because it is. The movie is a time capsule of wacky accents and boorish behavior contrasted with a super cool gangster in a nice suit. The scenario practically plays out like improvisational comedy, even though the frequent and often unexpected callbacks indicate a surprisingly well focused script. "Kick the Moon" is an easy enough movie not to get- I kind of doubt even most Koreans these days would have any idea what to make of it. Nonetheless, I liked it very much.