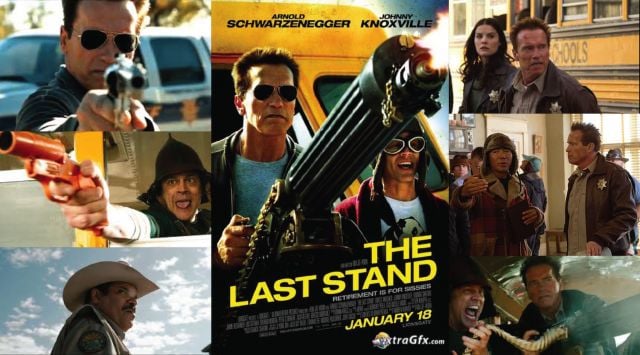 Kim Jee-woon is the man behind some of my favourite South Korean films. In fact, his 2008 tribute to the spaghetti western, "The Good, the Bad, the Weird", was the first Korean film I saw on the big screen. I still get chills thinking about "I Saw the Devil" (2010) and "A Tale of Two Sisters" (2003); but a Hollywood action flick starring the iconic Arnold Schwarzenegger?

"The Last Stand" is 2013 action film that follows Ray Owens (Arnold Schwarzenegger), an ex-LAPD narcotics hero who has had enough of the glory days and now resides as the sheriff of a sleepy town that borders Mexico. Just like Arnold himself, Ray has seen and done it all, but now enjoys the low-key happenings of this less exciting little town. His team of deputies are soft, unseasoned and woefully ignorant to the hard and graft policing that shadows their respected sheriff. While investigating the mysterious murder of a local farmer, Ray gets a call from FBI agent John Bannister (Forrest Whitaker) informing him that the international drug lord Gabriel Cortez (Eduardo Noriega) has broken out of his custody and is heading his way. With the help of his deputies, including one gun-crazed local played by Johnny Knoxville, Ray sets-up a blockade on his town's main street to prevent Gabriel's daring escape into Mexico. This sets-up a western-style standoff as Ray and team represent the last line of defence against this crazed drug lord and his freedom.

Arnold Schwarzenegger hasn't been in film since "Terminator 3: Rise of the Machines" (2003), and "The Last Stand" seems incredibly self-aware of this aging action-legends presences in the film. His character Ray is as hard as nails and acts as a mentor to one of the young guns of his team (who dreams of moving to the LAPD himself). Ray also has a few lines reminding everyone that he isn't as young as he used to be (as well as few moans here and there) but Ray, like Arnold himself, shows that he's still got what it takes when the bullets start flying.

Like most Schwarzenegger films there are plenty of one-liners that cheesily caption key moments, and for me none were as memorable as when Ray says: "I've seen enough blood and death…I know what's coming" and " My honour is not for sale". Fans of the big man will no doubt enjoy his return and while Schwarzenegger's role here doesn't deviate much from his action-packed filmography, it is most definitely not one of his finest performances, rather a reminiscent romp down memory lane.

To be clear, "The Last Stand" is an all-out action flick that comes equipped with all the stock standard car chases, explosions, guns, blood and bullets. There is little non-action fluff during its 107 minutes, and viewers can expect to see plenty of visual eye candy exploding across the screen. The visual effects were actually rather impressive, and contain some cringe-worthy gunshot hits that made me miss a blink here and there. Gabriel's car chase scenes, while deftly executed, contain many instances action fans would have seen many a time before. In fact, much of the film's meat relied rather heavily on generic marks of both the Hollywood action films and the spaghetti westerns, leaving it with little and less unique to call its own.

This pastiche makes "The Last Stand" feel out-dated and rather stale, and seemed to be enslaved by the actors' histories as well as the two genres mentioned above. With such heavy reliance on American actors, westerns, and the Hollywood action flick, it seems a little odd to put Kim Jee-woon behind the chair. It is because of such heavy influences that it is hard to truly assess Kim's efforts in the film, as (for better or worse) the film serves as a quilt/homage to American filmmaking and its stars. Along with Park Chan-wook's "Stoker", and Bong Joon-ho's upcoming "Snowpiercer", the "The Last Stand" marks a fascinating move by Korean directors as they enter the Hollywood machine. Watch this one to see Schwarzenegger back in action, Johnny Knoxville being a jackass, and Kim Jee-woon take a shot at American cinema.