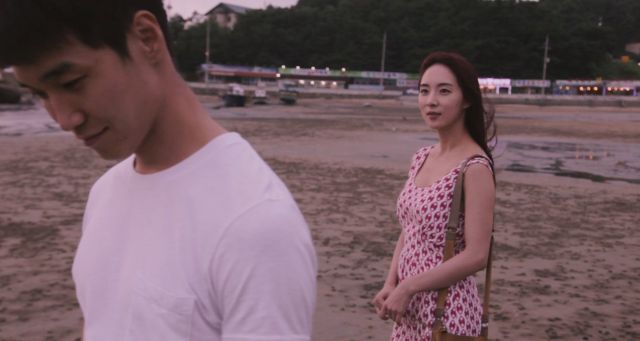 Tae-ik (played by Moon Tae-geon) is a schlubby adolescent boy taken on a trip to see relatives. It's there that he meets Ah-ri (played by Oh Yu-jin), a girl cousin who is younger than him, yet already taller and looking considerably more adult. The opening section of "Kissing Cousin" explores their relationship. Surrounded as they are by other family members, Tae-ik and Ah-ri feel a special bond with each other and part on glowing, comforting terms.

As a short film the first section of "Kissing Cousin" is exceptional on its own merits. Then we get to the main portion. Tae-ik (now played by Jang In-sub), is quite a bit more handsome and confident. His girlfriend Ye-ji (played by Jo Soo-hyang) is appreciative of Tae-ik's attitude. It's easy to see why. Tae-ik is attractive not because he fawns over Ye-ji, but because he enjoys spending time with her and is not embarrassed to tell her as much- less with words and more by action.

The influence the adult Ah-ri (played by Bae So-eun) has on this arrangement is difficult to ignore. A lot of Tae-ik's attitudes when it comes to women or even just life in general spring symbolically from his teenage encounter with Ah-ri. This in spite of the fact that Tae-ik and Ah-ri never really come off as romantic partners. Their meetings are charged with powerful sensuality, yet restraint is always the main order of the day. Ah-ri is precious to Tae-ik because the young man knows he can't have her, and mostly never even bothers to ask himself why.

"Kissing Cousin" eschews rigid plotting for feeling and character exploration. The lead performances are fantastic and mark the lead actors as talents to look out for in the future. Tae-ik is the kind of young man who does not overthink his own actions, and consequently, comes off as very genuine. Ah-ri has a smile that can brighten up the whole world around her because it contains that same spark of just feeling so real.

In most movies Tae-ik and Ah-ri would just be romantic leads. Yet they come off as far more compelling than that in "Kissing Cousin" precisely because they can't consumnate their passion with each other, so they redirect that energy to other places. Through this process, Tae-ik and Ah-ra are able to build and maintain strong interpersonal relationships. In this way "Kissing Cousin" deftly examines the idea that love is more a state of mind than a singular fixation.

It's a notion surprisingly well tied into real-life concerns, like that old idea of people finding romantic partners who remind them of close relatives. As presented in "Kissing Cousin", the idea is not an inherently creepy one. Tae-ik in the present day owes much of his emotional maturity to that childhood moment where he played with his cousin freely, experiencing and expressing a wide variety of emotions- none of them shameful ones. That kind of trust is quite hard to develop- which is why even when "Kissing Cousin" inevitably gets to taboo territory, Tae-ik and Ah-ri always seem to understand why their lives are as they are.