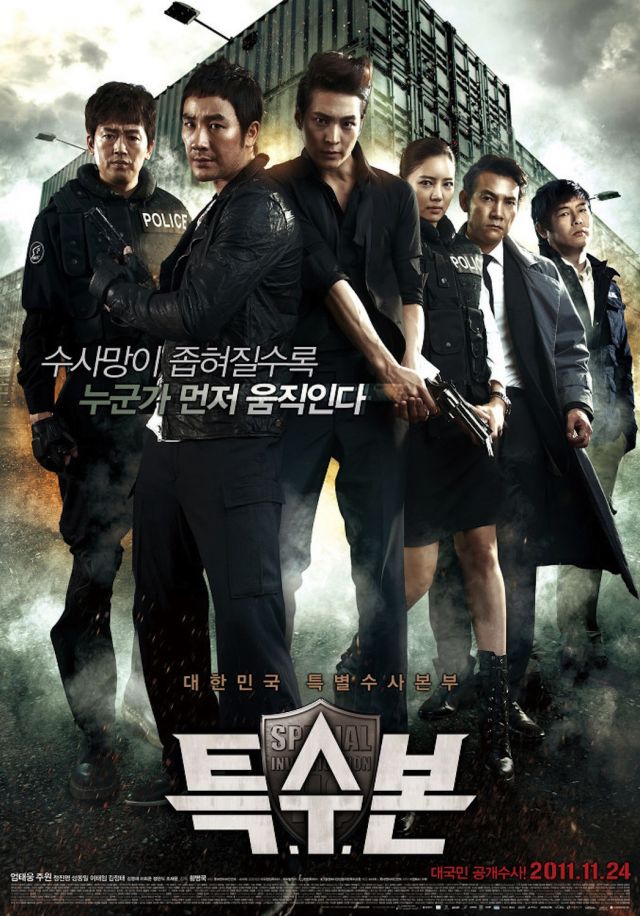 After an impressive run at the top, Lee Han's "Punch" finally gives way to Hwang Byung-gook's action crime film "SIU" (Special Investigation Bureau). The film opened last week and received a lot of interest with 346,875 admissions going its way on weekend. It stars Uhm Tae-woong and Joo Won as detectives tasked with solving a series of mysterious deaths. "SIU" is Hwang Byung-gook's second major film, his first being "Wedding Campaign" that he wrote and directed back in 2005.

Despite being dislodged from number one, Lee Han's "Punch" pulled 288,874 admissions. In doing so it jumped it up one place to be Korea's forth biggest money-maker of the 2011. Behind it comes a spew of foreign films beginning with "Arthur Christmas" at number three. This British/American 3D film has started the Christmas spirit on the silver screen in Korea and has earned 180,315 admissions for its efforts thus far. Next, although not so Christmassy, is "Reel Steel" which is still hovering in the upper ranks refusing to be counted out. "Reel Steel" now finds itself at nine for the most successful films released in Korea cinemas for 2011, about a million short of "Harry Potter & the Deathly Hallows: Part II".

Brad Pitt's comeback film "Moneyball" has so far had a modest performance since it was released last week. The big Hollywood star visited Korea to promote his efforts and the film is currently at number five with 501,195 to its name to date. The visually potent "Immortals" was close behind with 103,727 and the new "Twilight" film, entitled "The Twilight Saga: Breaking Dawn", kicked off its run in Korea with 88,116.

"50/50" is foreign comedy film by Jonathan Levine that is based on the true story of young man and his fight with cancer. The film has been very well received overseas and saw some 43,390 moviegoers get their feet wet with it in its opening week in Korea. Sandwiching all those foreign films together is "You Pet" and "Penny Pinchers"; between them they just scraped 5,500 admissions together.