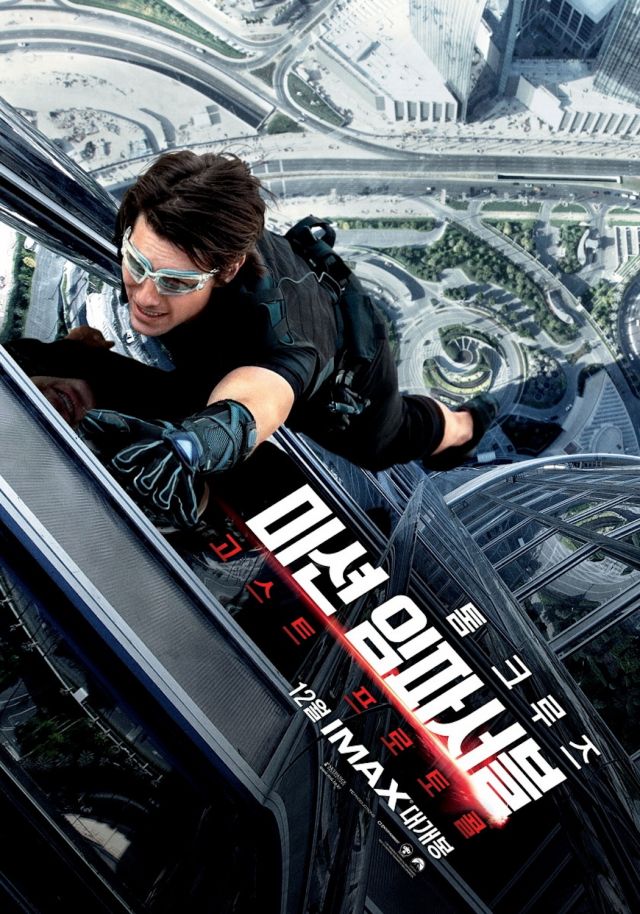 It's just under a week to go now until Christmas is upon us and without a great Christmas film to capture the spirit Brad Birds "Mission: Impossible - Ghost Protocol" has stolen the show. This is the latest film in the "Mission Impossible" series and it opened in Korea with a bang, standing head and shoulders above all with 1,079,510 admissions.

Hwang In-ho's "Spellbound" gave way to the Hollywood flick at the top, forced to be content with 313,159 admissions and the second place. That's almost half of what kept it at number one last week. The cute and lovable "Alvin and the Chipmunks: Chip-Wrecked" is next with 134,916 in its first week. Critics and moviegoers have direct harsh criticism against Mike Mitchell's animation, but the kids seem to be enjoying it all the same. Another animation receiving mixed reviews is "The Adventures of Tintin: The Secret of the Unicorn". Directed by acclaimed director Steven Spielberg, Tintin is a much loved comic book character whose appearance on the big screen has been met with unyielding scepticism and disappointment.

Foreign films continue to dominate as "The Twilight Saga: Breaking Dawn - Part 1" sits at number five. It'ss down two places from last week's 249,656 admissions to just 61,730. Following is the only true Christmas movie "Arthur Christmas", attracting a total now of 571,281 moviegoers. Amidst the domination of the December foreign films, Park Hee-gon's "Perfect Game" makes its play for the numbers at seven. It's an unforgiving time to come in to the game but it still managed a spot in the top ten with 32,364.

"Punch" is still around with a total now of 5,300,134 admissions, a magnificent effort that is attracting not only the locals but the international communities' attention too. Lee Han's smash hit still sits at number three of Korea's highest grossing local films of the 2011. "SIU" has crawled past the million admissions mark having been out on circuit for almost a month now. Lastly, "The Phantom of the Opera at the Royal Albert Hall" is at ten with 5,350 admissions.