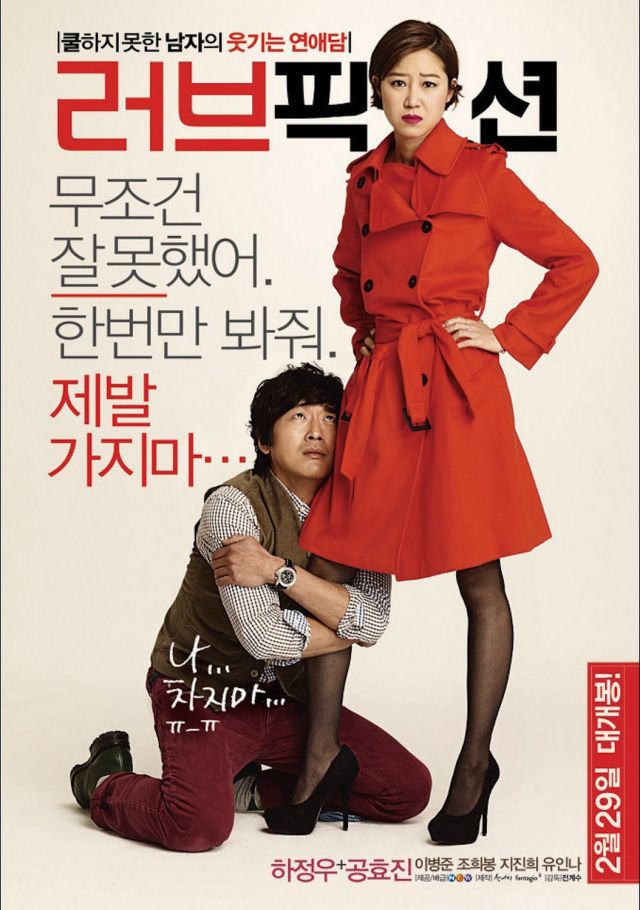 Chung Ji-young's "Nameless Gangster" once again is forced to surrender the top spot as the new Korean romance film "Love Fiction" steels the show. Directed by Jeon Gye-soo and starring Ha Jeaong-woo and Gong Hyo-jin, "Love Fiction" outshined all this past weekend with 567 533 admissions and just under 40% of the ticket sales. With the expectation of "Love Fiction", this week's top ten is largely dominated by foreign entries, including Martin Scorsese's awarding winning "Hugo".

"This Means War" is a spy comedy that pits two CIA agents against each other when they realise that they are dating the same women. The film stars Reese Witherspoon as the love interest, with Chris Pine and Tom Hardy as her suitors. "This Means War" captured 13.90% and 212,387 admissions. Despite moving down this week, "Nameless Gangster" is still sitting pretty at number three with 194,585, bringing its glorious run to a total of 4,399,127 admissions since its release in early February. Song Kang-ho is hoping that this week's number four, "Howling", will perform better than his previous film "Hindsight". "Howling" now has 1,531,667 admissions since its release in mid-February.

"Man on a Ledge" drops two places to drift into five with 70,935, and Daniel Espinosa's "Safe House" follows with 70 148. "Act of Valor" brought in an unremarkable 54 371 as the Korea crowds largely ignored the foreign action-orientated flicks that came out.

"Dancing Queen" has been a huge success and is still in the top ten despite being released back in mid-January. "Dancing Queen" added 51 315 to its total of 3 966 611, bring it just shy of the four million mark. Looking at 2011 top Korea films, those numbers put "Dancing Queen" somewhere between "Silenced" and "Quick". "Legends of Valhalla: Thor" is next with 42,211, marking its fourth week in the top ten. Lastly, Martin Scorsese's Oscar winner "Hugo" is at ten with 22,400.