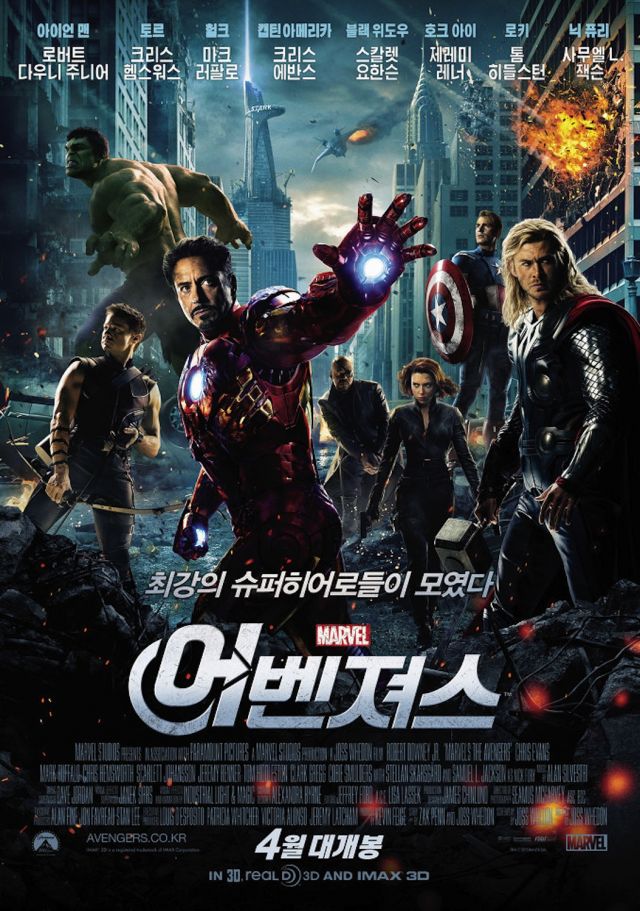 It was another moneymaking weekend for "The Avengers" as the crowds continued to stream in for Marvel's record-breaking blockbuster. The long awaited comic book film raked in another 995,156 admissions and now sits as the highest grossing film released in Korea for 2012 with 5,447,728 admissions. That's almost a million more than the Korean film "Nameless Gangster", which it dislodged at the top.

Moon Hyeon-seong's "As One" is still the choice Korean film at the moment. This true-life tale added 393,574 admissions to its efforts, bringing its total now to 1,227,662. Tim Burton's fantasy comedy "Dark Shadow" makes its entry in the chart at number three. The film stars the popular Hollywood actor Johnny Depp alongside Michelle Pfeiffer and Eva Green. "Dark Shadow" claimed 314,503 admissions in its opening weekend and was followed by "Mirror, Mirror" with 123,447.

Jeong Ji-woo's "A Muse" is unmoved at number five, but this week it holds that position with just 99,917 tickets to its name compared to last weekend's 182,263. At six is a new Korea film by director Min Gyoo-dong titled "Everything about my Wife". This comedy drama stars Lim Soo-jung, Lee Sun-kyun and Ryu Seung-ryong in a tale of a timid married man that tries to get his wife seduced by another man in order to initiated a divorce. "Everything about my Wife" attracted 91,548 viewers in its preview weekend. "Architecture 101" is still going at number seven despite recent news that the pirated version has been leaked online. The film added 67,467 to its run in theatres, putting its total admission count just over four million.

"Dr. Seuss' The Lorax" fell sharply from last week's number four to this week's eight. Last weekend the film claimed just fewer than 200,000 admissions but only managed 46,753 this weekend. The Japanese animation "Crayon Shin-chan: The Storm Called Operation Golden Spy" also fell down a few places to settle at number nine with 26,714. Kim Hyeong-jun's "The Scent" rounds out the top ten, adding just 10,214 to its new total of 1,234,209 admissions.