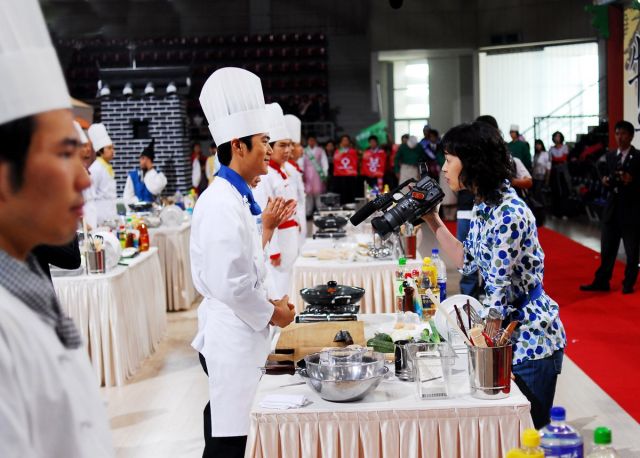 Seong-chan (played by Kim Kang-woo) was once the up-and-coming chef in an exceptionally prestigious Korean restaurant. One horrible accident later, and he instead puts his talents to use procuring high quality ingredients either for neighborhood locals or, when the situation calls for it, high level dignitaries. But then I'm getting into backstory from the comic book. As far as "Le Grand Chef" is concerned, Seong-chan's main goal is to become the victor in a national cooking competition, establishing himself as the true inheritor of a legendary cooking master long defeated by the Japanese Occupation.

"Le Grand Chef" is based on a very popular (if now defunct) comic which used Seong-chan's road trip stories as a storytelling device to go into the origins and proper preparation techniques for all sorts of food, be it a staple or exotic dish. The occasional cooking competition is about the only such dramatic device appropriate for the film format. So it was about the only route available for director Jeon Yoon-soo.

The actual title of the book and movie is something like "scrounger", except it's a very obscure highfalutin word that has to be written in Chinese. The very names of the characters have similarly offbeat symbolism. The name of reporter Jin-soo (played by Lee Han-na) means essence, while Seong-chan meets feast, and both names together form a four letter Chinese ideogram that means "glorious amazing feast". This isn't even getting into how the international trend of popular cooking shows started some time after the comic's heyday, so the format is completely different than what you may be used to.

For all this working against it, "Le Grand Chef" is a surprisingly accurate translation of the comic to screen, and a very strong film for many of the same reasons. The whole project is just very oddly personal. We are dealing with characters who sincerely, with no sense of obnoxious self-aware irony, treat food as their life's work. Take the story of the charcoal expert. It's overcomplicated and melodramatic, but that's why he takes charcoal so insanely seriously.

Even the villain Bong-joo (played by Im Won-hee) is a connoisseur first. His evil is secondary, and itself largely a dysfunction related to insecurity about whether he is giving food proper justice. A constant theme in the comics, respect for food, is paramount here. Many of the best plot twists directly address this, continually exposing food preparation as being a labor of love for which a minimum amount of crazy is necessary.

A whole slew of intriguing food-related philosophy is conveyed with both efficiency and depth. My favorite was probably where Joong-geo (played by Kim Sang-ho) sets out to discover the secret behind perfect ramen noodles- his character having been first introduced reading a ramen comic book by the same author whose work inspired "Le Grand Chef". And inspired the movie truly is- "Le Grand Chef" is a lot of fun, and the most authentic movie you're likely to ever find on the subject of Korean cookery.