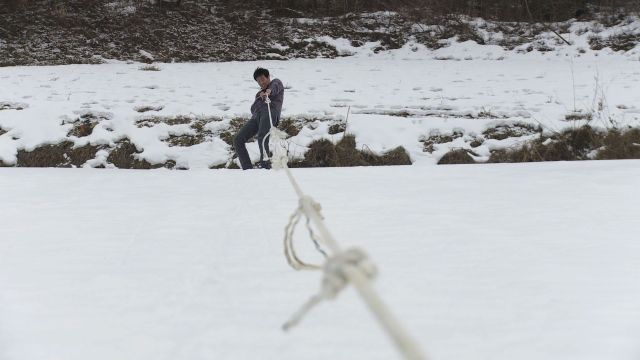 Heon-woo (played by Choi Sung-ho-I) is not having a good time in life right now. Lately he's been asking himself what's the point of even living anymore and...well the man's having trouble coming up with much of an answer. A repose into the mountains doesn't exactly do much to brighten his spirits. The snow is bleak and unwelcoming. The discovery that hunting traps exist everywhere to ensnare deer into a slow painful death isn't exactly much better. The way local manmade structures are under development also contributes to the sense that there just isn't that much left for Heon-woo to even do anymore.

Then exciting events happen to distract from Heon-woo from his depression. These events, surprisingly enough, do not make Heon-woo any less depressed. The disinheartening background of "Lebanon Emotion" is omnipresent, and there's this constant sense that the storyline is, more than anything else, to a way to keep Heon-woo distracted long enough to keep from killing himself.

Now, I don't want to mislead you here. The people Heon-woo ends up meeting have their own agendas, their own desires in life. The event which sets the story's main crisis off is an impulsive decision by a feckless woman (played by Kim Jin-wook), which quickly snowballs into other poorly thought through schemes. In context, it's understandable that she just wants to take a moment to indulge in some kind of freedom, however pointless and dangerous. At the same time it was probably a bad idea.

However, this chain of events does lead to her meeting Jeon-woo, giving them the wondrous opportunity to be depressed together. Yeah, there's no point hiding it. Even in its most uplifting moments, "Lebanon Emotion" is a terribly depressing film. The only real comfort is that the movie's never quite as soul-crushing and depressing as it could be. Which is kind of an accomplishment, I guess.

The main achievement writer / director Jung Young-heun is able to get at here is getting inside Heon-woo's head, and being able to portray the perspective of a lonely depressed person's extremely warped worldview. As messed up as the story gets, and as much physical danger as Heon-woo is in, all of this is a substantial improvement over his lot at the beginning of the film, where he's just come to the crushing realization that there's no one left who really cares about him.

Can he be redeemed through love in circumstances as adverse as awful as this? Maybe. The ending to "Lebanon Emotion" doesn't really give an answer more definitive than that. But then it's not like the answers we get in real life are much better. Heon-woo's weak survival and recovery don't exactly inspire a lot of confidence. Still, so too does winter eventually make way for spring, the deer are inevitably are put out of their misery, and stuff that is being built will some day become built. Just because we don't see this stuff right away doesn't mean it will never happen. Try telling that to a depressed person and see if it makes them feel better.