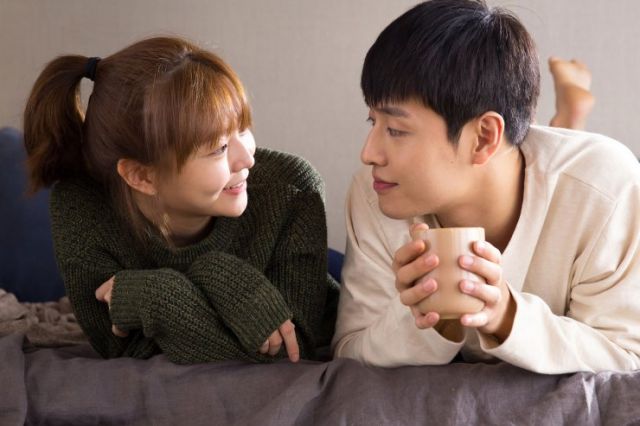 If you're looking for a cute, feel-good film then look no further than "Like for Likes", a film directed by Park Hyeon-jin ("Lovers of 6 Years") and starring an incredibly gifted cast. It focuses on dating in the internet age where activity on social media can make and break relationships. The film released in South Korea February 17 and will open in New York February 25. In Korea, its first week resulted in fourth place at 12.2% on box office charts with 320,000 moviegoers. Afterwards, the film will screen in 17 major locations in North America (More information here).

"Like for Likes" tells the story of three different, but interconnected, couples who find love with major support from social media. While social media communication and "liking" posts play major roles in the romantic lives of these six people, the impact of the social media platform in the film wasn't as strong as the title, or the preview, suggested. Perhaps it's because social media is already rampant and an integral part of life in 2016. There was nothing that stood out in the film that said, "Look at what life with social media is like!" A comparison to the past would've done the film good in that sense.

As for the couples, Yoo Ah-in played actor No Jin-woo who, although arrogant, is true enough to himself to go after what he wants, which is the love of screenwriter Jo Kyeong-ah (Lee Mi-yeon). Their social media relationship focuses on how she blocks him from her account and forces him to source information on her through friends and news outlets. Even though Yoo and Lee had amazing chemistry on screen and their scenes together were potent, the storyline that carried them through the two-hour runtime was less than riveting. She's trying to book him as an actor in her drama, and the circular nature of the hiring process is not forgiving in a film where relationships drive the action rather than the plot.

More intriguing was the romance between the two forty-somethings, Jeong Seong-chan (Kim Joo-hyuk) and Ham Joo-ran (Choi Ji-woo). They embody the popular "cohabitation" love story that is mixed with "we're just friends" and using social media to get Joo-ran a date. The two fuss like an old married couple and realize slowly that they want to be more than friends. What makes this relationship so winning is how casual they are. Yes, their friendship develops a bit too quickly, but it can be overlooked because of how they grow together as a direction correlation to their friendship. Kim is a master of facial expressions as the lively chef Seong-chan and he brings out the best in Choi.

The third couple, the youngest, was the most touching. Kang Ha-neul in an outstanding performance plays Lee Soo-ho, a young composer who lost his hearing and is now profoundly deaf. He has overcome it and has most people fooled into believing he has no disability, but he hasn't fooled himself. His disability has quelled him into severe shyness and insecurity. His situation and youth immediately evokes sympathy, but it magnifies when he falls head over heels for effervescent producer Jang Na-yeon (Esom). Theirs is a first love story seen in many places, but the struggles that Soo-ho faces is what colors it more deeply. Their social media contact reflects the new form of written communication that social media has shaped. Men and women must learn to read between the lines in order to promote romance, a skill that Soo-ho distinctly lacks and one that Na-yeon is willing to teach.

Each couple has its struggles: dealing with single parenthood, dealing with aging, dealing with disability. "Like for Likes" explore these issues and how Korean society pressures the people in the couples to keep secrets and hide and change themselves to deal with them. The romances they develop help to assuage and work with the issues. Unfortunately, the issues aren't too deeply explored, which keeps the movie on par with a light rom-com. This isn't a bad thing, but I would've preferred to do some digging into psyches and souls and get to know the characters and their issues better.

What makes "Like for Likes" beautiful is the focus on relationships and the giddy, happy love that comes from starting a relationship. While unrealistic in that the situations are never truly touched by the gravity of consequence, the hopeful, happy message is what comes through. Even in a day an age of distant connections, where relationships are forged on the amorphous internet, love still manages to take root and bloom. 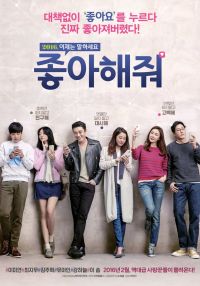 "[HanCinema's Film Review] "Like for Likes""
by HanCinema is licensed under a Creative Commons Attribution-Share Alike 3.0 Unported License.