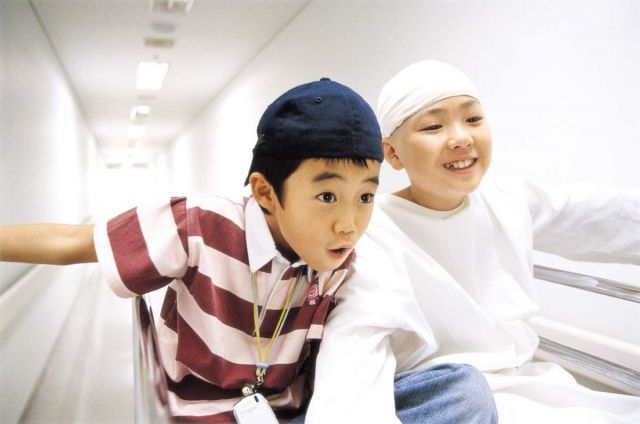 Han-i (played by Park Ji-bin) is the annoying younger brother to Han-byeol (played by Seo Dae-han). They live in typical sibling conflict, such that when Han-byeol expresses discomfort and apparent sickness, Han-i is dismissive and just decides to play video games rather than do anything useful. Unfortunately for the brothers and their parents, Han-byeol really is very sick. From there "Little Brother" quickly turns into a waiting game to see whether or not Han-byeol will die.

Right from the start "Little Brother" gets points for honesty. While sick hospitalized children are by design a melodramatic trope, at the same time, sick hospitalized children are in fact a real world occurence, and not an invention thought up by sadistic screenwriters. "Little Brother" well demonstrates that having a child at risk of dying from a serious disease is terrible and heart-wrenching. There's no good way to prepare or react. The best you can do is try to find a way to cry that doesn't puff up your face so the kids know how unstable you are.

But the main central gimmick "Little Brother" employs is simply using Han-i as the perspective character. An annoying younger brother does not become less annoying just because his older brother happens to be sick. In many ways Han-i's behavior gets worse, for reasons that are perfectly understandable. Han-i thinks the universe hates him for creating this inconvenience, and it's only by realizing that his brother has it even worse that Han-i is able to grow up a little.

This is best demonstrated with another sick kid, also called Han-i (played by Choi Woo-hyuk), who little brother Han-i starts to hate because he's scared of being replaced. All of the scenes involving little kids do a good job presenting how kids frequently have no sense of perspective. They consider minor slights involving collectible trading cards as being worthy of a violent confrontation, whereas searching for a crazy man who lives in the mountains is completely sensible and reasonable.

Little brother Han-i doesn't really grow up over the course of "Little Brother", but he does begin to appreciate that Han-byeol (and sick Han-i) are in a very precarious situation. Because little brother Han-i is fortunate enough to have a sick body, that means it's up to him to go the distance and do whatever it takes to help the people he's close to gain some sense of joy and understanding as they draw ever nearer to that decisive moment that will determine whether or not they will get to live a longer than average life.

Based on a true story, "Little Brother" fully inhabits that all to real world where coming to terms with the prospect of death is about as important as urging a loved one to fight as hard as they can and never give up an inch against that dragon cancer. To those of you want a better appreciation of what it means to be a child struggling with forces beyond his understanding, "Little Brother" gives a sad, accurate window into that world.