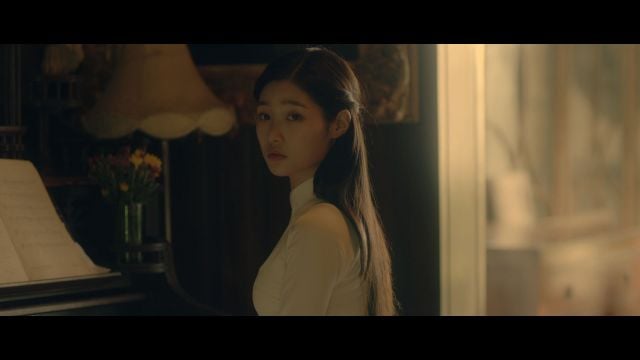 In "Live Again, "Love Again" two storylines take alternate turns in focus. The first is about Vietnamese barista Mi (played by Chi Pu), a piano player living in Ho Chi Minh City who composes music and posts it on YouTube. She's suffering from strange nightmares (or memories? It's never really all that clear) about a run-in with a South Korean soldier during the Vietnamese War. Then there's Pil (played by San E), a popular South Korean recording artist who's in a slump because he keeps thinking about his ex-girlfriend Yoon-hee (played by Jung Chae-yeon).

Now, you might be expecting that Mi and Pil will meet each other via music and then discover some commonality about their experiences that will allow them to move on and heal. They do meet each other. Eventually. As in we have to wait until maybe the halfway point for Pil and his entourage to finally get to Vietnam. Never mind Pil's entourage- I'm not sure any of them have names and even if they do, these guys just disappear at one point and are never mentioned again.

But even that piecemeal amount of story progress has nothing to do with Pil searching Mi out for her musical talent. Indeed, even though Pil sends her an English text message that, sans context, looks like random spam, their eventual meeting is mere coincidence. By the time Pil figures out who Mi is the movie is pretty much already over and the revelation meaningless. I don't think they ever even get around to talking about Mi's relationship with Yoon-hee, another subplot that goes absolutely nowhere.

That's really all that "Live Again, Love Again" is. This is a movie filled with various meaningless storylines that are almost entirely undeveloped. There are no dramatic stakes. At one point Pil tells a producer to go take a hike and there are no negative consequences for this. Pil is apparently so rich he can just take a random vacation to Vietnam whenever he wants. And yet we're supposed to feel sad because Pil's an idiot who lost his girlfriend over a stupid argument they had over money?

Likewise, it's not clear why we're supposed to care about Mi's dramatic visions, or why they're supposed to be meaningful to her either. Mi's hopes and dreams are not elaborated upon, nor was her relationship with Yoon-hee discussed in any serious detail- as far as I can tell Yoon-hee really was just a random regular at the café where Mi works. The only thing Mi ever does with Pil is order some food for him and his friends on a riverboat. Even as a travelogue "Live Again, Love Again" is horribly banal.

About the only reason I can think of for why "Live Again, Love Again" even exists is to promote its own soundtrack. Unfortunately the music is just as bad as the narrative construction. The songs are almost entirely cheesy, overly melodramatic piano riffs, played over equally clichéd visuals. "Live Again, Love Again" is an exceptionally bad movie, with no redeeming qualities whatsoever.