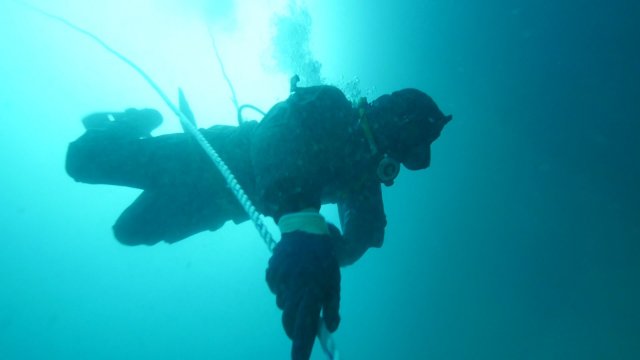 Once the Sewol ferry started sinking, and the boat became submerged, it was inevitable that a certain class of trained professionals would get involved. I am referring to the deep sea divers, to whom director Bok Jin-oh has dedicated "LOGBOOK". Divers of this skill level are hired for a wide variety of tasks- and in this particular case that task was, unfortunately, to retrieve corpses for proper burial.

"LOGBOOK" chronologically goes over the salvage operation. The experience is inherently a morbid one. Divers talk about how the golden time where the recovery of living people may have been possible was completely squandered by a rescue operation where no one was in charge or had any idea what was going on. Eventually the operation achieves some sense of competency, although even then the divers are put under heavy stress by the generally awful conditions of the salvage operation.

A lot of "LOGBOOK" is just detail about how hard it is to be a diver. The work is physically exhausting, and the area in which Sewol sank is a perfect mix of terrible conditions when it comes to water frigidity, poor visibility, and high pressure. Early on divers didn't even have any proper place to rest between dives. One mentioned that he could feel diving related illness coming on, but he persisted for fear the other divers would have to take more turns. Later on a haunting visit to the hospital suggests that many divers contracted chronic medical problems because of their work.

This is the human element of the operation that was often lost in the disconnected way the press described divers. They were never people so much as tools intended to achieve a specific goal. There were moments when the divers were blamed for somehow being too incompetent to finish the job correctly. They weren't stupid either- they could tell they were being scapegoated. Then there's that particularly surreal sequence near the end where American Navy personnel show up claiming to have superior equipment and technique, only to fail miserably at every task they attempt.

It feels odd to call the diving operation a failure, given all the facts "LOGBOOK" presents about the operation's difficulty. Really, it's impressive that the divers did as well as they did under such awful conditions. But then, all the anecdotes we get are so patently horrifying. Take the one about a large number of students who locked arms to die in their last moment together. The diver telling the story tries to make it sound, well, better than dying alone at least.

Little as small comforts like that may be, that's all they have. The divers were these people who had to look at grieving parents every day and tell them either that they were still looking or that yes, they had confirmed the death of their child. What does a person say in circumstances like that? At least talking about such experiences has a therapeutic effect- for them at least. I think back to the events of "LOGBOOK" and just shudder on the inside, from the sheer horror of it all.

"LOGBOOK" is directed by Bok Jin-oh.