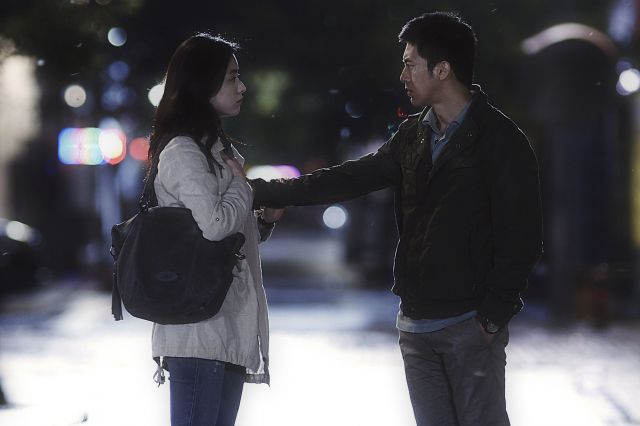 Kang-Il (played by Go Soo) is a firefighter who is completely dedicated to saving lives. A little too dedicated, bizarrely enough. He has very little regard for his own security and willfully forces himself into dangerous situations just because. Mi-soo (played by Han Hyo-joo) has the opposite problem. She's a doctor who's willfully forced herself not to show empathy with her patients. The worst thing that can happen to a doctor's career, after all, is admitting any kind of fault- it's a major opening to lawsuits.

Not that Mi-Soo's a cold-hearted person by any means. She's bubbly, cheerful, and very forward- when she's with people she's allowed to empathize with, anyway. Contrast Kang Il. He refuses to have any fun under any circumstances. Yes, the life of a firefigher often involves danger- but it's also a job where they may be called on to do any other weird random task that no other public department is really designed for. In an early scene, the full squad has to ride out to a part of the freeway with gigantic bug-catching nets, for a purpose that's just about impossible to guess until they actually get there. It turns out to very comical and adorable.

But Kang-Il isn't having any of that. While his co-workers are having a good time, he just stands around refusing to show any emotion save for "this is definitely not fun". Enter Mi-Soo- who won't accept this as a proper response and tries to cute him into actually enjoying life. He refuses, in a way that's so deliberately unfunny it fully comes around and becomes funny again.

The dynamic between the two leads in "Love 911" constantly skirts around these boundaries. Kang-Il isn't just a sour guy who refuses to have fun. His past is such that it's difficult for him to process the idea that he's even allowed to have fun. He's a nice (and handsome) enough guy otherwise- but it's clear that he hates himself way too much for his own good. His co-workers in the fire department recognize this, and very deliberately enable Mi-Soo's aggressive flirting as much as possible. This leads to many funny situations similar to the one above- since Kang-Il could be rid of this annoying woman forever if only the rest of the fire department stopped helping her.

Mi-Soo gets just as much from this relationship. We see that she's a woman full of life and compassion, and can guess that this is why she wanted to become a doctor. Then we get a sharp contrast with her demeanor in the hospital scenes. She and Kang-Il both are taking their work too seriously- but for markedly different reasons that are surprisingly difficult to clearly compartmentalize. For them, simple platitudes aren't enough. They need contrast, and find it in each other.

That's what "Love 911" is about centrally. The effort that needs to be put into relationships, and the full appreciation of what you have and may some day lose- but not today, not if at all possible. It also recognizes that work and love are not independent spheres of our lives. Loving a person means being the best possible you so that they can be happy, too. It means that sacrifice has to come from that desire- not out of some determination to appropriately assign blame. It all makes for a very human message about relationships. "Love 911" has the laughs and drama necessary to be great watching on its own. But it's this deeper meaning that lets it linger on in my mind.