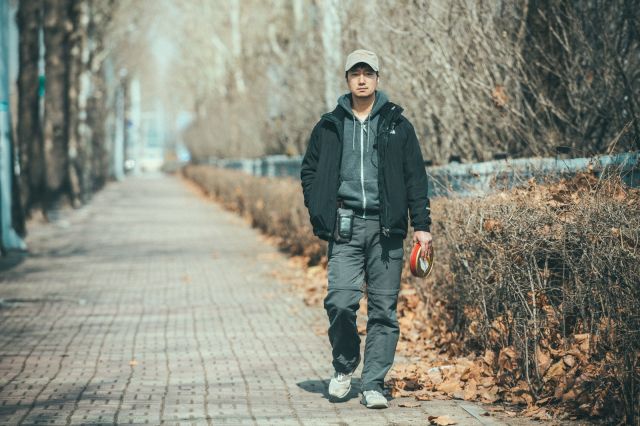 An old man (played by Ahn Sung-ki) is playing invisible instruments and musing over the merits of apples. An unexpected act of altruism spurs a peculiar retribution throughout the halls of the mental hospital, with an equally puzzling conclusion. Initially filmed in glorious black and white, "Love and..." never makes that much sense to begin with. Then writer/director Zhang Lu practically makes an aside to the audience where he says, if you really believe in love, then you'll understand film as being even more incomprehensible than this.

Zhang Lu really pulls out all the stops here in terms of gimmicky filmmaking. He messes around with the sound editing, splices in unrelated clips from completely different movies, takes cameras into apparently but not actually empty rooms, and shows off normal everyday objects breakdancing. What does any of this have to do with love and/or filmmaking, or even the black-and-white opening portion of the movie? I really don't know.

It's not even something I can blame on the director. Zhang Lu films are always noteworthy for their long vacant camera shots of nothing, and eschewing the telling of story for just an exposition of atmosphere. But as atmosphere goes "Love and..." is just plain weird. And not even campy explicit weird like "Self-Referential Traverse: zeitgeist and engagement". The tagline for "Love and..." is much more seemingly transparent- do you believe in love?

That's the kind of question that usually comes up in a movie that is actually about love somehow. It doesn't even need to be loverly love. Brotherly love and motherly love would do the trick too. But I'm at a complete loss as to what kind of love "Love and..." alleges to be exploring. A love of film maybe? The Korean title roughly translates as the time of film love. But that much could just be a reference to the intertitles. The distinction is difficult to place, given how little the narrative structure actually relates to itself.

My best guess is that "Love and..." isn't actually supposed to be coherent. It's one of those movies where every apparently incomprehensible image has some sort of secret special meaning that can only make sense in the eye of the beholder. Given the obvious deliberate effort Zhang Lu had to go through to painstakingly structure all these setpieces, several of which surely must have been very difficult to film, there must be some greater interpretation at work here. Right?

Probably the single thing that makes watching postmodern film an unsatisfying process is that it's difficult to tell whether the director is actually trying to say something or whether the entire exercise is just some sort of elaborate prank intended to mock people who try to interpret movies. I can't say with complete confidence that "Love and..." is in fact as meaningless and nonsensical as it appears to be on the surface. At the same time, given the almost complete absence of any apparent purpose to the movie's construction, I'm loathe to recommend it unless you really, really, really like overthinking things.