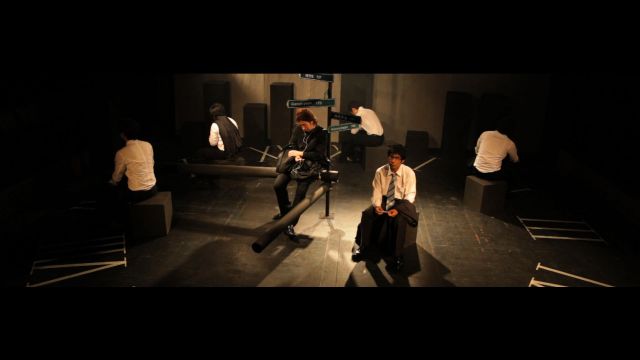 The husband (Kim Jae-man) and wife (Sin So-hyeon) are ordinary, unremarkable people. The kind who we generally see in fairy tales before all the magical stuff happens. However, they believe, as most ordinary people do, in a magical exciting world of high drama that will open up with just the right plot catalyst. Now, they don't actually live in this world. It doesn't really exist. But what happens if they just assume it does and act accordingly?

"Love in 42.9" is an extended, prolonged stare into the abyss of romantic storytelling. The characters, unwilling to face the prospect that they live in a normal world where the best explanations are had by just engaging in simple conversations, engage in elaborate games designed to prove something. What they want to prove I have no idea, and I don't think that they do, either.

This is not an exciting film. Its slow and deliberate pacing constantly begs the question of how long the elaborate facade that makes up the story is supposed to go on. Even the backdrop defies a lot of conventional wisdom. The entire film appears to be set on a stage. Like, a stage where normally you would watch avant-garde plays. Everything is dull and black, props and furniture are replaced by sound effects. And yet, camera angles are constantly set up and reenforced which would be completely impossible to accomplish in in actual written play.

The lack of dialogue is supplemented by excessive narration. At times, it can be difficult to grasp the sheer density of it all. Strangely, even though by design this is a very text-intensive film, it doesn't strike me as being a particularly Korean film. The overarching themes of the strange expectations people have regarding what they think love should be cross cultural boundaries, and can be easily grasped by anyone who's had bizarre expectations out of a relationship and just plain refused to admit it.

Does that make this a good film? I'm honestly not completely sure. There's so much weird experimental stuff going on here that it's difficult to evaluate "Love in 42.9" as a narrative film. In many ways it challenges the very notion of conventional narrative itself and the way it affects people. There's very little in the ways of answers, but a lot in terms of questions. Even the simpler scenes have subtler meanings that are very difficult to grasp- what's the purpose of the subway interludes, I keep wondering? Is it about the ennui of everyday life? Human selfishness? The sound of silence?

This is a very serious film that wants to be thought about and to leave a lasting memory. It had some success to that extent with me- I keep replaying the film's final line, along with the accompanying quote by Sir Thomas More (yes, it's that kind of movie), and I have to admit, these are greater emotional issues worth thinking about. Regardless, it takes a while to get there, and up until that point the film is an exercise in perplexed curiousity. Consequently, "Love in 42.9" only really merits a weak recommendation for the first viewing- though the highly film-minded may find a lot more worth thinking about in a second or third screening.

"Love in 42.9" is directed by Choi Wee-an and stars Kim Jae-man, Sin So-hyeon, and Yoon In-yeong. It is based on the final scenario idea from Park Chul-soo.