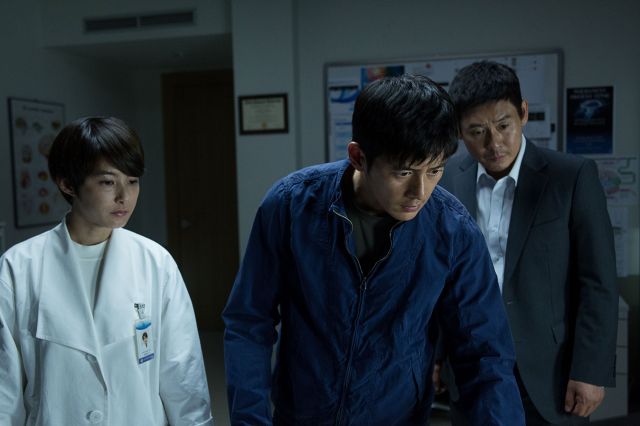 Dae-ho (played by Go Soo) is a reporter with legal troubles who struggles to make time for family. Then, one day at the amusement park, Dae-ho loses something very precious to him and is haunted by nightmares, slowly being driven mad. That is, until he learns about neurology researcher So-hyeon (played by Kang Hye-jung), who is working to unlock the power of the "Lucid Dream" to reconstruct in fuller detail the mysteries of the subconscious.

With such a cool concept it's a bit of a shame that the actual plot of "Lucid Dream" is just a standard investigative thriller. A good investigative thriller, admittedly, as writer/director Kim Joon-seong-I has just the bare minimum number of twists and turns to keep us guessing as to the ever elusive identity of the true antagonist. It was admittedly a little silly how dubious medical practices are more of a plot point than Dae-ho's backstory, which barely gets used even as a red herring.

But as to the good stuff, "Lucid Dream" looks great. The film's climactic setpiece is beautifully set among the crumbling black-and-white dreamscape of the Digital Media City in Seoul. The atmosphere is oddly fearful and unnerving, and well symbolizes the general collapse in psyche of the three persons who ultimately meet there. It's the ultimate spookiness- trapped inside a dying mind, feeling ever conscious of the destruction of self, the hopelessness of it all, the sheer desperation.

So yep, a nice metaphor. And it's actually quite well built up to throughout the story. If writer/director Kim Joon-seong-I doesn't seem to show much interest in the possibilities of the dream world, it's because Dae-ho doesn't care. Remember, Dae-ho only wants to go into dreams to resolve the nightmare of his daily reality. We can feel this tension in all of the dream sequences. There's always this sense that Dae-ho feels as out of control there as in the real world. Consequently, Dae-ho wants to escape dreams as badly as he wants to escape reality. In both locations his sense of self is intolerable.

The contrast is well marked with Yong-hyeon (played by Park Yoo-chun), a mysterious man of the dream world who seems to have all the answers yet Yong-hyeon's powers are illusory. He is master of the dream world precisely because he is powerless in the real one. If Yong-hyeon at times seems magical in scope, and a better hero than Dae-ho can ever hope to be, it's important to realize that Dae-ho, with his actual joyful real life talisman, very much does not want to become Yong-hyeon.

Of course as is often the case with metaphysical stories it's very easy to read an amount of depth into "Lucid Dream" that may well not actually exist. So to put this movie into simpler teams, the "Lucid Dream" concept? Cool. The story? Above average. Special effects. Excellent, and frequently subtle. The emotional kicker at the end? Actually pretty good considering what an archetypal character Dae-ho. So this is an easy recommendation for me.