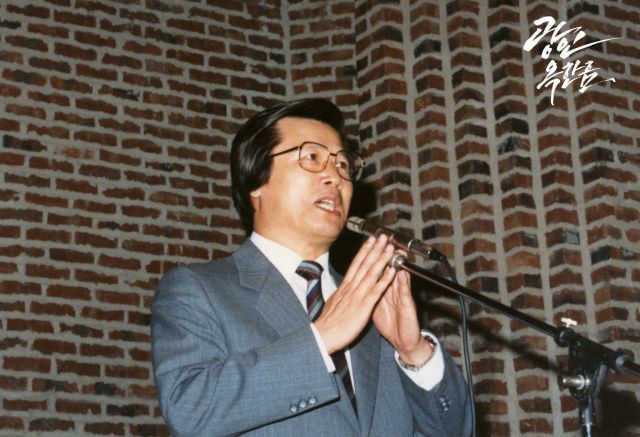 Ok Han-heum has already been the subject of two other documentaries by director Kim Sang-cheol. So I went into "Madman Ok Han-heum" with a bit of resignation. Considering all the scandals South Korean megachurches have been embroiled in during recent years, it feels a bit crass to so heavily romanticize one of the men most instrumental to their rise. So I was very surprised to actually watch "Madman Ok Han-heum" and discover that apparently Ok Han-heum himself felt the same way. The final years of his life were filled with dire warnings to the next generation of pastors to focus on Jesus, not their own career success.

Drawing heavily on footage taken in the last years of Ok Han-heum's life, director Kim Sang-cheol shows that the famed pastor actually predicted most of the problems that would befall the megachurch system after his death. What's more, a constant quivering hand present during many of these speeches hints at deep nervousness on Ok Han-heum's part. Medical condition notwithstanding, the impression is given that Ok Han-heum was tortured by the thought that the oncoming calamity was his fault.

The most obvious problem with megachurches, as Ok Han-heum explains, is that the hierarchical structure makes it easy for certain high-ranked officials to evade accountability. A lack of personal relationships with parishioners also make it more difficult for pastors and parishioners to relate to one another. This forces a cyclical appeal to authority, rather than the teachings of Jesus, which ultimately goes against what proper ministering is supposed to be about.

There's also the matter of prosletyzation. Ok Han-heum saw, correctly, that these increasingly insular command structures within the church would alienate nonbelievers, and for good reason. Jesus' message is a positive one about love and hope. But the megachurch model incentivizes pastors to instead rally against common enemies, leading to a more polarized religious environment.

Make no mistake. Ok Han-heum was a hard-line Christian through and through. But his message here about how insuring the spread of proper Christian faith is far more important than any individual battle, really rings true given everything that happened since his death. The manic right wing Christians in "Troublers" came to mind while I watched this documentary. I thought of their insane conspiracy theories about Communists and homosexuals, or how they mocked the families of those who died in the Sewol family disaster.

Yet it was Ok Han-heum, in his later years, who was thought of as crazy for suggesting that South Korean Protestant Christianity was on the edge of a spiritual crisis. Hence the title. While "The Follower, Ok Han-heum" is the better film in terms of explaining who Ok Han-heum is and why he's important, "Madman Ok Han-heum" is the superior product when it comes to explaining why Ok Han-heum still has such a loyal following in the present day. Alas, I never saw "The Follower, Ok Han-heum 2: Discipleship" so I have no idea what its angle was. Although I'm certainly more interested in it now that I was a couple of weeks ago.