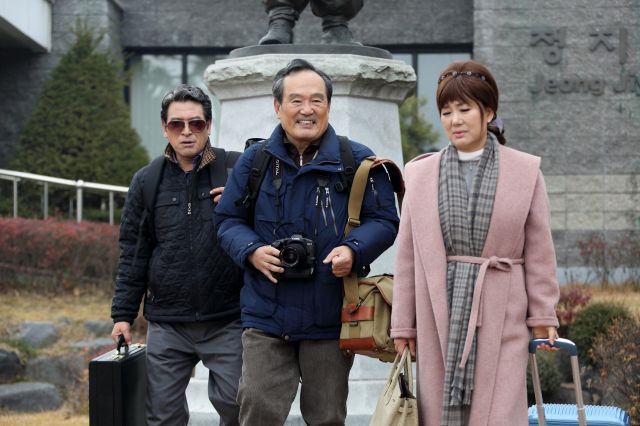 Nam-woo (played by Park In-hwan) is an aging photographer. Time was a person could just set up shop in a nice scenic area with a camera and people would pay for the privilege of having their picture taken. But now? Kids these days with their smart phones take all the romance out of having a stranger take your picture only to be seen several weeks later in the mail. The world has changed. Nam-woo has changed. And, he's decided, it's time to end it all.

Genrewise "Magic Hour" is a road trip movie, albeit one with a fairly long wind-up. The film's finalistic tone is the more noteworthy quality, though. Nam-woo goes out traveling not in the name of conscious discovery, but just to wrap up the few remaining loose ends of his life. This tone persists as Nam-woo meets musical showman Dal-joo (played by Nam Kyung-eup) and rental store owner Eun-nyeo (played by Oh Mi-hee), who also struggle to justify their existence in a world where their skills no longer appear to be necessary.

For all the dour underpinnings "Magic Hour" is not as bleak as it sounds. The main characters enjoy traveling down memory lane simply because there are a lot of fun places to go. Any new location they visit, or task they perform, or person they meet brings back happy memories. Their age allows for a healthy detachment from the reality of daily responsibilities. Indeed, they only ever express nervousness in the face of a more possibly permanent obstacle.

With Dal-joo, at least, we get the impression that he was always a bit of a vagabond. It's easy to visualize a younger Dal-joo engaging in the same happy-go-lucky behavior. This then creates the impression that the man who is now a charming and eccentric old man was once a terribly obnoxious scamp. The more we learn about Eun-nyeo's backstory, the more obvious it is why she sees him as falling more into the latter category than the former.

Nam-woo, though, is the character whose feelings of inner malaise provoke the journey, particularly the strained relationship he was with his son Jong-ha (played by Jung Eun-chan). I wasn't fully satisfied with Nam-woo's ending. A forgiveness story arc would have felt a lot more appropriate, given what we ultimately learn about Nam-woo's painful past. Really, all of the story arcs have this perverse old person wish fulfillment quality, as the goal seems to be living to see your children survive without you.

I'd rather be more immersed in the movie's more dreamlike qualities. Consider how Nam-woo's photography, which is to say, the specific kind of photography he does, is focused on immortalizing beautiful happy moments between couples. Those moments could otherwise be so easily forgotten, yet can live forever because the photograph acts as a sort of talisman allowing the memories to rush back at any time when least expected. It's one of the more emotionally compelling arguments for photography as an art I can recall ever having seen even if, in the context of "Magic Hour", the purpose is obviously schmaltzy.