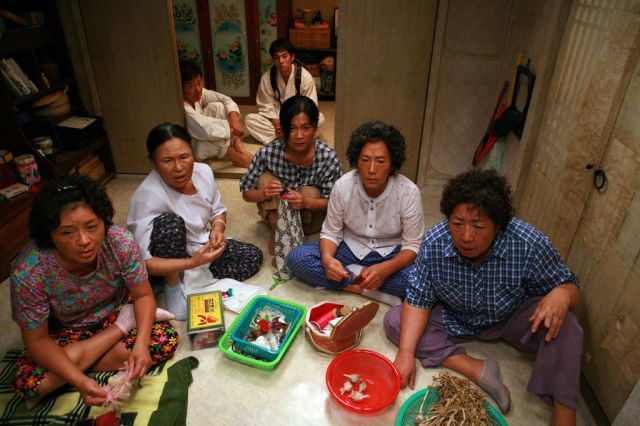 Choong-soo (played by Lee Moon-shik), always on the lookout for a big pay-off, takes on a job to locate the first love of the dying Chairman Park (played by Joo Hyun). As it happens, this mystery woman is located in the same general area as the foul-mouthed grannies from the first "Mapado" movie. And so "Mapado 2" begins, less with a promise of actually getting to the story and more rehashing the same jokes which made the first "Mapado" such a fan favorite.

...With Korean people anyway. "Mapado 2", being a comedy, is not the kind of movie that exports well. Some jokes, namely the ones involving vomit and various other precious bodily fluids, translate easily as low-brow humor across cultures. Other notions, like the entire concept of pottymouth older women being funny in the first place, are kind of difficult to explain. Abstractly, you would not expect old women to swear so much and be mean-spirited. But in rural South Korea, well, they do pretty much whatever they want.

So does screenwriter Sa Moo-el. Time and again the grannies torture Choong-soo and it's funny, because he's a bit of a buffoon and deserves it. Lee Kyu-han takes up the slack in the straight man role as a guy who is much better at not arousing the wrath of the grannies simply because by knowing when to shut up. It's hard to pity Choong-soo for getting his face boiled over when he's such a loudmouth, and not in the affecting granny way.

While I wasn't a big fan of the vomiting most of the other jokes are fairly funny once you get accentuated to the brand of. "Mapado 2" is a movie about the kinds of friends who seem like they hate each other because they're always playing pranks on each other and being smug. Yet weird though it may seem, the grannies do love each other as well as Choong-soo, who being the petty materialist man he is, fails to realize that the real treasure was on "Mapado" all along.

If you want to go in to full on film theory mode, that reaction to modernity is a lot of what makes a movie like "Mapado 2" popular. The various old women are originally from radically different counties in South Korea, yet they work hard providing food for the rest of the country and only ask for the most token creature comforts from the rest of the country in exchange. Even when tragic backstory becomes a plot point, there's always the sense that these women stayed on "Mapado" so long because they like it so much.

Of course the less charitable and probably infinitely more correct interpretation is that Korean people like this movie because there are many scenes where Choong-soo is looking like a fool with his pants on the ground. And you know, there's nothing wrong with that. "Mapado 2" is the kind of movie that goes down real well with alcohol and friends. While I would hesitate to call the movie explicitly good, it does make for a pretty fun time.