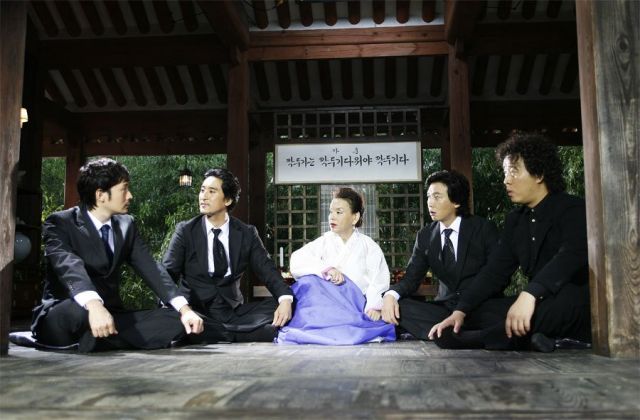 So it's been a year since the end of "Marrying the Mafia II", which concluded with mafia heir In-jae (played by Shin Hyun-joon) and prosecutor Jin-kyeong (played by Kim Won-hee) getting married. During that time, the bad guy of "Marrying the Mafia II", prosecutor Myeong-pil (played by Gong Hyung-jin) has been stewing in jail as he prepares to take revenge on In-jae's family, who are technically no longer criminals as they have incorporated into a legitimate business enterprise.

The premise sounds straightforward enough, and having liked "Marrying the Mafia II", I came into "Marrying the Mafia III" with optimistic expectations. Then I discovered, to my great surprise, that "Marrying the Mafia III" has barely any interest in its own story at all. Even though the opening is dedicated entirely to Myeong-pil's prison workout regimen, his only big scene aside from that is at the end, with a very anticlimactic and clichéd gangster showdown between champions. So, not even a massive fight that involves the whole cast.

You're probably wondering how exactly "Marrying the Mafia III" can fill two hours of screentime without ever getting into its own plot. Well, the answer to that question is constant flashbacks to what the various family members were doing back in the eighties. What kind of women were they dating? What kind of clothes were they wearing? How did their relationships become as they are in the modern day? And so on and so forth.

None of this has anything to do with the modern day plot, which wraps up in barely a few scenes once everybody gets done reminiscing about the old days. As a result, there's almost no urgency in the scripting, so the story just comes off as an extended series of very tangentially relevant gags, a large number of which were ripped off from the previous movie. The script attempts to make light of this by having characters make reference to how they're doing this again, but really, I might not have noticed the recycled jokes at all if the movie hadn't explicitly told me that was what was going on.

More original humor is very hit and miss. At its nadir, "Marrying the Mafia III" resorts to rape jokes, albeit probably not the kind of rape jokes you're thinking of. Oddly enough, plenty of the movie's better moments are also very crude. There's the whole weird sequence on the home shopping channel where kimchi is sold by a rather crude and bizarre pitch that centers around infidelity of all things. Then there's the final laser sequence and the rather unexpected obstacle to success they run into.

Beyond that, though, we're mainly just looking at complicated wordplay jokes. Amusing though these may have been in "Marrying the Mafia II", after a certain point contrived stupidity stops being charming and just becomes annoying. The main characters are gangsters, after all, and even if they've supposedly gone straight there really needs to be a reason for us to want them to succeed. Without an active love story to string the plot along, "Marrying the Mafia III" can't accomplish even that much.