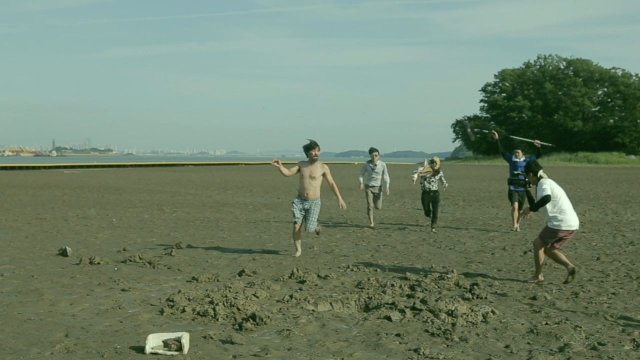 The opening titles of "Masterpiece" are done in a classic olde time silent film style. As the movie gets past these, we see a café with Charlie Chaplin emblazoned on the front. As we're introduced to director Jin-wook (played by Choi Jin-wook), an obvious possible theme is developed. Jin-wook is going to make a classic Charlie Chaplin style movie. And this does happen eventually. But first we have to endure sixty minutes of Jin-wook ineffectively trying to make an obviously bad movie instead.

Now, I don't want to dump too hard on the genre of movies about questionably competent directors making bad movies. It's not like there's that many of them. But there are enough that the decision of Choi Jin-wook (who is also the movie's actual director) to not really utilize the silent film gimmick is a bit baffling. In context it feels like "Masterpiece" was originally going to be a much more generic movie, and that the production team only came up with the silent film idea at the last minute.

When we finally get to the silent Chaplin style movie at the end, it's spliced together from footage we had already seen the characters create for the sake of the bad movie. And yet the visuals are done in a choppy comedic style that differs substantially from the takes we had seen earlier on. The abrupt appearance of a character who isn't actually an actor over an extended single cut just makes it all the more obvious that Jin-wook is not simply repurposing old takes.

We also never get to see the project retooled into a silent film. The twist involving the destruction of the sound files happens too late. Instead of the halfway point transitioning to a more interesting story about Jin-wook trying to desperately salvage his film project by recreating a century-old archaic style, we're just stuck with more exposition about the boring movie Jin-wook is making. What's worse, Jin-wook's movie is so boring that Choi Jin-wook quickly runs out of new jokes to be made about how bad it is.

More interesting character moments involve Jin-wook's home life, and his relationship with his semi-supportive wife So-yeong (played by Joo Nam-jung). I also rather liked everything involving the used car dealership. It's just such an appropriate gathering place for chronic underachievers in the cheap film industry. The characters in "Masterpiece", while pitiful, are at least doggedly earnest enough it's hard to hate them, even as their failure seems inevitable.

But even there "Masterpiece" doesn't really work an an underdog story because Jin-wook is the only one who's really redeemed. We don't find out if the movie was successful. Although to be entirely honest I was never totally clear on what constituted a success for the movie. Was Jin-wook hoping to submit it to film festivals? The stakes in "Masterpiece" are so poorly defined there's just no way to really get invested in the story, yet somehow the movie manages to drag on in this vagueness, feeling much longer than its eighty minute runtime.