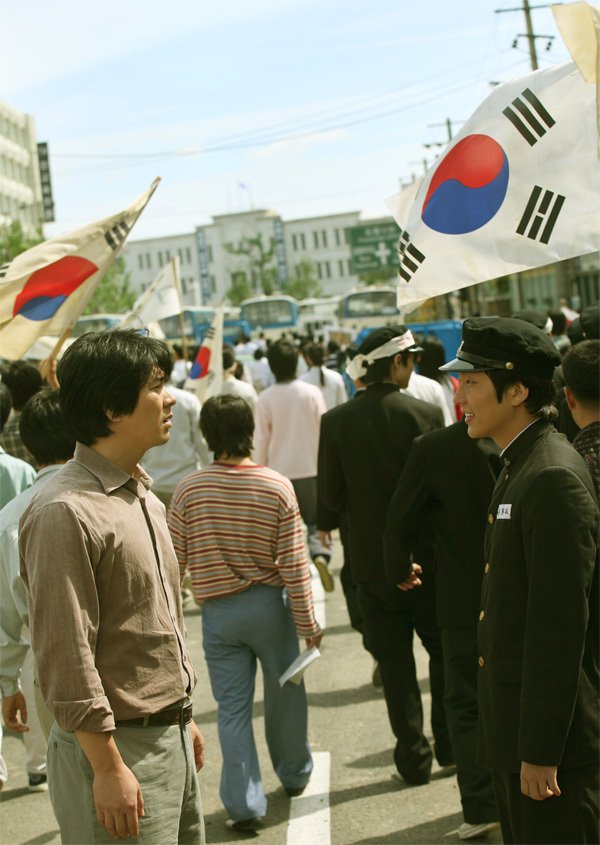 Jin-woo (played by Lee Joon-gi) is a high school student in Gwangju, circa 1980. Sin-ae (played by Lee Yo-won) is a local nurse who goes to his church. Min-woo (played by Kim Sang-kyung) is his older working brother. Heung-soo (played by Ahn Sung-ki) is her father, a former military officer. They all live fairly normal lives. But a meeting with history ruptures this destiny, as a military crackdown provokes a full-scale resistance movement lasting for a full week.

The larger first portion of "May 18" more closely resembles a romantic comedy than it does a historical epic, because the characters in "May 18" don't really belong in a historical epic and they know it. While the Gwangju Uprising started out as a (college) student demonstration, other portions of Gwangju society were forced to get involved because the police and later the military started cracking down on so-called revolutionaries indiscriminately. It's like the old song goes- I'd rather get beat up for something that I did than for something I didn't do.

Courage is frequently romanticized in stories of this nature, but "May 18" gives the curious impression of making courage seem rather foolhardy. Heung-soo ends up becoming the de facto leader of the revolt, and tries as best as he can to urge caution even as the military keeps escalating the situation with little sense of restraint. Realistically it does't matter what the revolutionaries do after a certain point, because the South Korean dictatorship under Chun Doo-hwan had even less of a pretense for democratic expression than Park Chung-hee did.

Still, Park Chung-hee, for all his faults, did inspire a decent amount of patriotism for South Korea, a country whose existence is in fact completely artificial. Even though I call the lead characters revolutionaries, in "May 18" they are constantly portrayed as patriotically waving the South Korean flag. The military drew first blood in Gwangju, a fact even conservatives acknowledge while some still insist the Gwangju Uprising was really a Communist incursion.

Not that this is ever discussed in the movie itself. Until the crackdowns start and the situation starts getting violent, "May 18" and its characters have no particular political interests at all, such that controversial elements of the Gwangju Uprising are not well explored. Considering the greater historical context of "May 18" this may seem somewhat surprising. However, the simple fact that a mainstream movie exists at all which portrays the Gwangju Uprising in such a positive light is remarkable, and would have unthinkable back during the eighties.

Beyond this context, though, there's not very much all that unique regarding "May 18", which in terms of storytelling mostly sticks to standard Korean film conventions of the time. The characters are sympathetic mostly for their everyman qualities. These are people who we want to see get a happy ending because they're kind, and deserve to be rewarded for that. The real world doesn't work like that, though, so instead we're forced into a finale where they're forced to either do morally right deed for the sake of their country, or crawl into a corner and pretend like the oppression never really happened. Just be glad you (probably) have never had to make a choice like that.