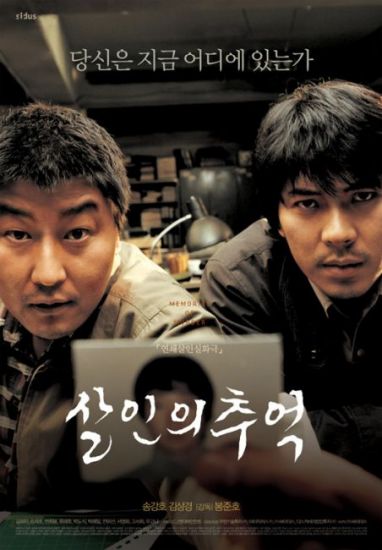 The film is inspired by a series of brutal murders of 10 women during the 80's in a small town in Gyeonggi Province. Korea was still under a militaristic and authoritarian government at the time when progressive social and political change was just on the horizon. In an interview with The Korea Society, Bong Joon-ho mentions how Korea during the 1980's wasn't ready to tackle a case of this magnitude. During which police investigations were hampered by inefficient procedures, dated investigatory methods, and a problematic and unsupportive socio-political climate. Amongst this instability, two cops from radically different backgrounds find themselves paired together in the hope of catching the elusive serial killer.

The dynamic Song Kang-ho plays Detective Park Doo-Man, a local detective whose passion for the job is unquestionable but he lacks the savvy required to crack such a case. He is quick to assume facts and assign blame, and even manipulates suspects into false confessions. His rash actions are paired with the physical abuse dished out by his fiery and impulsive partner. Such a character, however, doesn't protrude as much as you think-this is Korea during the 80's after all.

Detective Seo Tae-Yoon (Kim Sang-kyung) is a Seoul cop who volunteers to assist on the case. He is pragmatic and observant, and while he brings a modern and professional dimension to the rural police outfit, he is not immune in becoming personally invested in the case. He is the perfect counter to detective Park Doo-man as well as to Song Kang-ho himself. This detective duo is airtight within the story and their characters and interactions provide a compelling social commentary on the issues of the time.

The case received a lot of media attention at the time and the film does well in its handling of this. There are a couple of scenes that show hordes of journalists covering the story and the detectives' actions, but this notion of it being a well publicised case was largely left as an off-screen implication, a contextualising tool of sorts. What this does is cement the investigators personal stories in the investigation, and that's what "Memories of Murder" is all about.

Although the case was never actually solved, "Memories of Murder" manages to create suspense throughout the film. As I mentioned, because the films attention is largely wrapped around the two detectives, it allows for a more personal identification with the characters and the events depicted. The suspense is not created through the detectives' pursuit of an identified suspect, but rather as a result of their experiences and emotional attachments to the case. The fact that the killer is still at large in reality is transferred beautifully to the narrative, but not at the expense of our enjoyment or satisfaction.

The last scene, in which Detective Park Doo-Man turns and faces the camera, is a clear attempt by the filmmaker to almost expose the real killer. Bong Joon-ho said in an interview that when the detective does so he would, by chance, be looking directly at the real killer. But the viewer is, in all likelihood, not the killer. This self-reflexive technique makes all who watch the film question themselves in some way because, as spectators, we are occupying the same space in which Bong Joon-ho has suggested the killer would be. I find this particularly intriguing when this idea is met with the films social commentary of the time. Bong Joon-ho was willing to place his entire audience under suspension in the off chance that he was right about the actual killer watching his film. An idea shared by the very eyes staring back at us in that intrusive final scene. Brilliant.

Available on DVD HK from YesAsia, DVD US from Amazon and Blu-ray from WOORIDVD