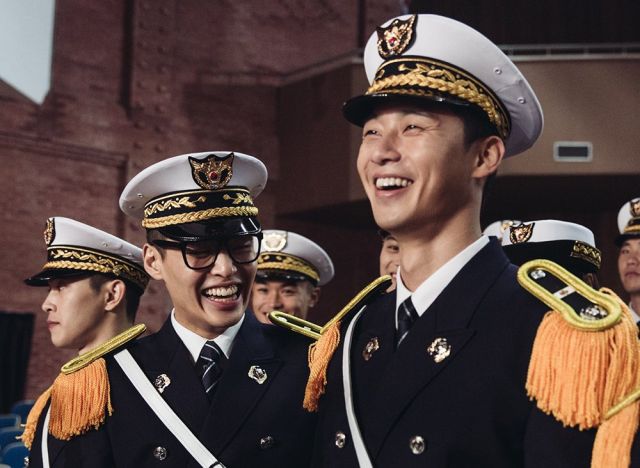 Gi-joon (played by Park Seo-joon) is a well-meaning generally dopey kid who loves meat. Hee-yeol (played by Kang Ha-neul) is a bespectacled stiff young man who knows where the meat comes from. Together, they join the police academy...and train, is technically all they do for most of "Midnight Runners", since they're not real cops. We even get a training montage near the end, where we see them get all manly and swole for the sake of taking on the movie's final boss- crime, in the abstract.

I mean yeah, I am referring to an actual character with a name, but "Midnight Runners" is not a specific character-driven story. The exact nature of the crime Gi-joon and Hee-yeol inevitably end up solving isn't really all that important. It's not even clearly explained what the crime is until police academy instructor Joo-hee (played by Park Ha-sun) gives them some much needed intelligence later on, since there's only so much a couple of idiot trainees on leave can find out in the face of an actual organized crime gang.

That's because "Midnight Runners" is very transparently a recruitment tool for the South Korean police, who continue to suffer bad public relations in the wake of the last two conservative governments. And as propaganda goes, "Midnight Runners" is money well spent. You've got two attractive, charming stars with great chemistry, some very funny character-driven gags, and beautifully chaotic action sequences that really call to mind how, for all their training, Gi-joon and Hee-yeol are strictly amateur hour cops.

But none of that detracts from the obvious propaganda elements. The Korean National Police University logo is everywhere. The instructors at the school, even when they look mega goofy, are eventually vindicated as practitioners of proper policing arts against bad dudes. The only negative portrayal of a police officer is when Gi-joon and Hee-yeol meet one who, failing to realize the gravity of the situation, hilariously demands paperwork.

He's not supposed to be representative of the platonic police ideal though. That role falls to wise mentor figure Professor Yang (played by Sung Dong-il), who explicitly states that the main real problem with the police is that there aren't enough of them. Oh, if only there were enough brave men and women that they could invest the resources necessary to investigate every possible crime. Hint hint. When Gi-joon and Hee-yeol take matters into their own hands, the implication is clearly that in a better world, such action would have been left to the real cops.

But then real cops would not have been anywhere near as amusing as Park Seo-joon and Kang Ha-neul engaging in aggressively cute bromance that is only rendered all the more charming by their obvious incompetence. I really liked Gi-joon and Hee-yeol. I really liked "Midnight Runners" as a whole, and considering how they're not even rookies by the time the movie's over, I could easily see a sequel maintaining most of the kinetic fun magic of this production. But uh, yeah, the propaganda. I just thought I should warn you, since goodness knows no one else discusses that stuff.