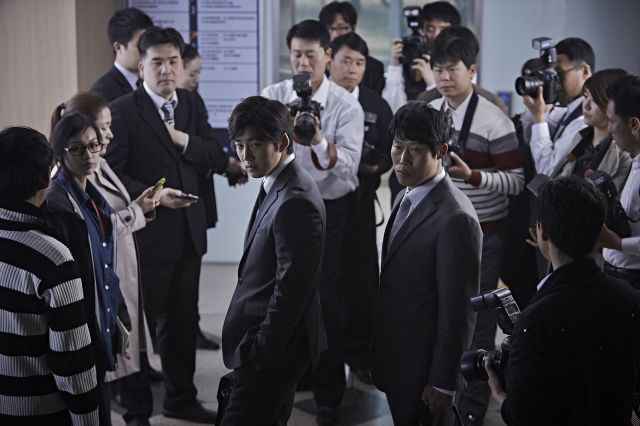 Jae-ho (played by Lee Kyung-young) is a working class man turned radical protestor after the city of Seoul appropriated his home for eminent domain. Jae-ho and several of his like-minded fellows responded by holing up in the building and refusing to leave, prompting an attack by the police. In the aftermath of tragic disaster, Jae-ho needs legal defense to sort out what happened- enter Jin-won (played by Yoon Kye-sang), who initially treats this as a regular job but changes his mind upon realizing that for reasons unknown, the prosecutor is trying to impede the investigation.

"Minority Opinion" is a very thick movie that's not likely to be easily grasped by anyone not fairly familiar with Korean legal culture, or at least the legal culture of a country where housing is such a big deal that it spurs violent protests. Fortunately, the excellent documentary "2 Doors" gives a pretty good overview of that context, so if possible watch that movie first and you'll probably be on the same page as most Koreans are when it comes to "Minority Opinion".

Once that proper background is established, what we're left with is a legal thriller. Emphasis on the legal. To be sure, the few times that Jin-won steps out of his office and on to the street with his co-stars, these end up being very important story events. But this is only because as a lawyer everything Jin-won does is a part of the legal process. Jin-won has to operate under very strict ethical rules. Which in fine legal film tradition, are used against him in rather hypocritical fashion.

Ironically, what somewhat lets "Minority Opinion" down is that it's not terribly theatrical. In contrast to a more traditional good-versus-evil story like "The Attorney", "Minority Opinion" takes place in a modern Korea where independent observers get suspicious if evidence manages to magically turn up out of nowhere, with no apparent purpose except to defame someone's legal claims at the best/worst possible moment. Jin-won can have some confidence in the fairness of the system.

Yet at the same time the system isn't really a just one. As per usual in most of the world, the law is much much harsher depending on the color of their collar. That Jae-ho is under more scrutiny than the police is of little surprise. What's more ridiculous (and sadly all too plausible) is how at the end of the movie, even after Jin-won has proven serious upper-level misconduct...well, what did you expect? The legal system protects their own.

Truthfully there's not too much to be said all that spectacularly about "Minority Opinion". It's a serious, ripped-from-the-headlines legal thriller that well acquits itself on finer legal points. We don't find out what actually happened in that building until the very end, and at that point it's just an afterthought anyway. It's not that we can't handle the truth- it's that nobody really wanted to, because that means we don't live in a black-and-white world. Again, this ambiguity prevents "Minority Opinion" from reaching the crowd-pleasing heights of "The Attorney"- but in practical terms "Minority Opinion" is most definitely the more relevant film.