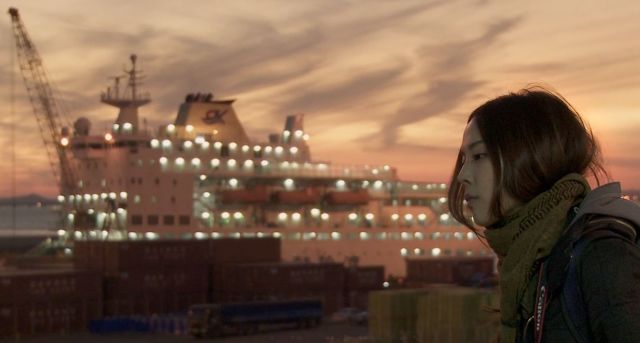 On the basic level "Mira Story" is just a standard travel documentary. Choi Mi-ra goes to Jeju Island mainly for sightseeing purposes, although the barge she's on is also carrying a quantity of books intended for use in library kiosks in the small town of Gangjeong. Gangjeong is the kind of small peaceful village that travelers often love to go to- it's a friendly place with beautiful scenery and a simple layout. This makes for a welcome respite from the clamor of city life.

After a fair amount of peaceful discussion and sightseeing the idyllic statement ends up being broken by a police blockade against protests against the construction of a gigantic naval base. Why is the government building a gigantic naval base in Gangjeong? That's...well, that's a good question actually. I've tried researching the topic, and the closest I can get to a practical answer is that there's some submerged rock to the southwest of Jeju that China might somehow try to claim even though international law says only rocks above sea level can be claimed as territory.

"Mira Story" isn't a political movie, and the question of why the naval base needs to exist isn't one explored in much detail, mostly because there doesn't seem to be much to explain. Everyone seems to like Gangjeong the way it is. From Mi-ra's perspective at least, it's the small town atmosphere that's most enjoyable and it's hard to imagine how the importation of weapons is going to improve that.

But especially consider the military construction in the context of the books. The people of Gangjeon had to go through a lot of trouble to import these books for their library kiosk program. We see that the books represent an undeniable public good. Now, contrast this with the efforts the government is making both to build the base and set-up a daily blockade to hold off protestors. A single day of these expenses could probably have funded the entire book program a hundred times over.

That's the argument director Heo Chul is making- nothing direct or anti-military. It's just, look at how beautiful this town is! Wouldn't it be a wonderful place to go visit on holiday? There's easily enough material here to make a documentary in the vein of "Splendid but Sad Days", just showcasing the natural beauty and atmosphere normally closed off to those of us who live in the city. The naval base discussion, while unavoidable, is itself symbolic of how the base is destroying the very Korean culture it's purporting to protect.

"Mira Story" presents the case for peace by just showing us what peace, real peace is like. It's being able to make a small trip, meet new friends, and discover interesting facts about small communities you've never heard of before. Mi-ra genuinely enjoys her time in Gangjeong, for all these faults. As much as the future of this community holds ominous tidings, it's nice to at least have those joyful moments. And in the end, isn't that what freedom really is anyway?