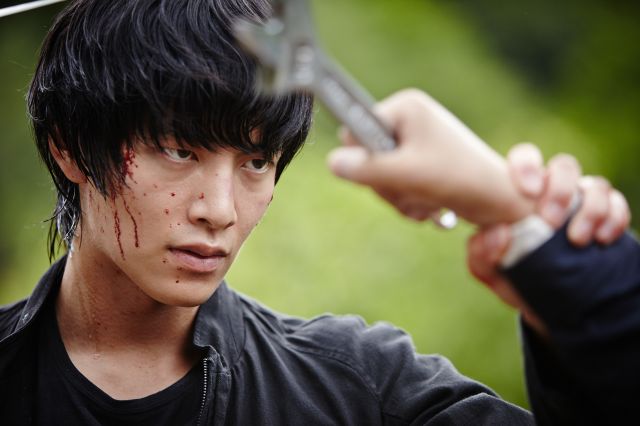 Bok-soon (played by Kim Go-eun) is mentally challenged. She's intelligent enough to make a living as a street peddler, but that's the full extent of her abilities. The young woman has trouble keeping track of anything but the most simple short-term reasoning, although she does easily understand the concept of love. Ironically, the titular monster of this film, Tae-soo (played by Lee Min-ki) shares almost the exact same basic personality traits. It's just that where a bad day for Bok-soon means screaming like a crazy person and conking people on the head, a bad day for Tae-soo means brutally and violently murdering everyone in the room.

A lot of weirdness ensues as these two people interact with a real world that they only barely understand with radically different results. The shifts between scenes are perplexing- in one stretch we go from discovering the terrible secret behind Tae-soo's pottery, Bok-soon lightheartedly preparing for an epic quest, people abruptly and comically getting lost in the woods, to a bizarrely misleading showdown at an isolated cabin.

While this film definitely has an otherworldly feel, it is clearly set in the real world. And it's pretty inescapable that as bizarre and incomprehensible as Bok-soon and Tae-soo are as people, the sheer simplicity and directness of their attitude is actually pretty compelling compared to the supposedly mentally well-adjusted characters. Who for the most part are just jerks.

King of the jerks is Ik-sang (played by Kim Roi-ha), who's the closest thing the movie has to a perspective character. He knows enabling Tae-soo's psychopathic behavior is probably a bad thing, but never seriously questions his own agency in Tae-soo's violent murders. To the contrary- Ik-sang's attempts to stop Tae-soo are motivated almost entirely by selfishness, and do absolutely nothing to address the fact that Tae-soo is himself merely a tool of the culture that Ik-sang lives in, and expresses no serious interest in leaving.

This is as astonishingly misanthropic movie. Society did not create Tae-soo, but the only reason the crazed lunatic is running around free is because society evidently has a place for deranged people who will commit murder on a moment's notice. Hilariously, there's often the sense that Tae-soo could probably be talked out of killing people, it's just that it's never occurred to anyone to tell Tae-soo that murder is bad. The film's final shot of Tae-soo's face gives the impression, not of a defeated killer, but of a guy thinking for the first time "is that really what I look like?"

Taken altogether director Hwang In-ho has pieced together a sick, violent movie that is in many ways a mockery of the fact that it's a sick, violent movie. Everyone's always trying to fight Tae-soo on his terms, completely failing to realize that the only reason Tae-soo fights anyone at all is because they boorishly disrespect him. In this way, Bok-soon is the most fitting possible antagonist for him. She hates Tae-soo for the same reason she hates anyone else- the guy's just another rude jerk in a world that already has too many. There's a lack of pretension in that motivation which makes the ending all too appropriate. Bok-soon and Tae-soo don't have the mental capability to process lies. Everyone else, though, they just assume lies are necessary to do business.