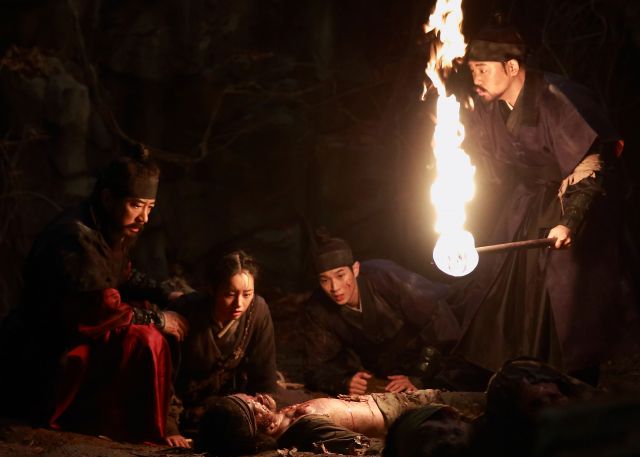 The opening scene of "Monstrum" definitely gives the impression that it's not the titular monster we should be worrying about. Long before we hear its ominous growls the film is witness to the spectacle of a senseless massacre- royal soldiers against civilians. The lone survivor of this scene, Myeong, grows up into Hyeri, and has learned several fine investigative arts from her adoptive father and Yoon-gyeom (played by Kim Myung-min) and his comic relief sidekick Seong-han (played by Kim In-kwon), which are put to the test as they investigate the monster's path of destruction.

...At least that's what I thought was going to happen. While "Monstrum" has billed itself as being a mashup between Joseon costume drama and monster movie, in actuality the film is more of a royal court drama. Nearly all of the essentials of the story are wrapped up in the power struggle between King Jungjong (played by Park Hee-soon), high-ranking minister Woon (played by Lee Kyung-young) and frontier general Jin-yong (played by Park Sung-woong).

Bear in mind that almost none of this royal court drama has anything to do with the titular monster. And really, the conspiracy seems awfully elaborate in the first place considering how low the stakes are. A sympathetic reading of the film would posit that the aggressive arrogance of the stronger characters is a metaphor for the monster itself. Their actions created and continue to further empower the monster, while they themselves obliviously fail to realize just how dangerous the situation really is.

Well, to be clear, that's probably exactly what director Heo Jong-ho was going for. The one-dimensional overexposed nature of the plot just make all the royal intrigue come off as very boring. This is especially true since it has to compete against the monster itself, a brutal, hideous beast with minimal weaknesses that's easily sent into a forthing rage. The way "Monstrum" is set almost entirely during a single bloody night further intensifies the strain of the situation. The monster rapidly evolves from an urban legend to a civilization destroying force of nature, with only the heroes standing in the way.

So it's a shame that the heroes, too, end up being about as boring and broadly drawn as the villains. Having gone to great pains in the opening scene to establish that Yoon-gyeom, Myeong, and Yoon-gyeom have great analytical minds, "Monstrum" barely does anything with this. The monster is ultimately defeated through brute force rather than intellect, and the main characters are constantly being saved by other random people instead of saving themselves.

When it comes to the monster anyway. There's several good comic relief scenes that involve the main characters dealing with human antagonists through various wacky schemes. These are by far the best character building moments of the movie, as they're the only ones with much personality. Beyond that the only character of interest is the monster itself. But I gotta admit, as CGI abominations go, the monster's almost good enough to carry the whole movie on its own. Alas, we have to spend way too much time with the boring humans first.