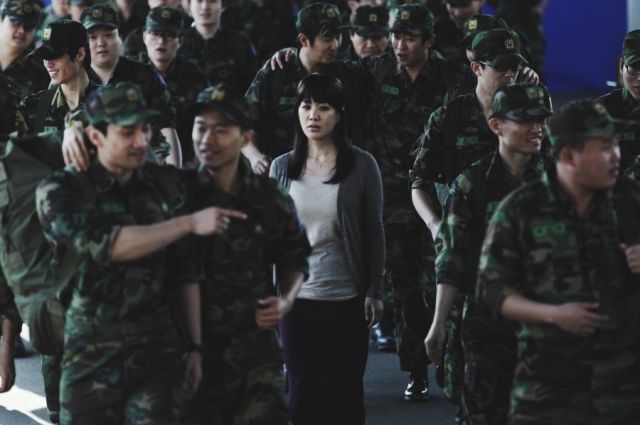 It's been fifteen years since the apparent murder of a young child. Detective Chang-ho (played by Kim Sang-kyung) discovers something astonishing at an emotionally charged location- a place only known by himself, the child's mother, and the the girl's kidnapper. With this, a race quickly begins to try and apprehend the criminal before the statute of limitations run out.

"Montage" is produced excellently. From the very first scene, there's palpable, alarming, painful tension in the air, and this never really lets up. Director Jeong Geun-seop doesn't achieve this by just tossing into adrenaline-pumping action scenes, though. Rather, the terror mainly comes from the quiet moments, where the audience has no idea what will happen next, and even a fakeout ends up leaving us in a mildly panicked state.

While this is all well-done, for quite some time a lot of the film feels like it's just going through the motions. I thought to myself at times, yes, Mr. Director, you've established that you can make good thriller material. Is this really all that you have? I know the tropes you're using and I can tell what you're doing. This is all great pot-boiler material, but a film needs more than a quick heart beat and deliberate precision to make for a good narrative.

Consider this review the recanting of the faithless. The film's technical merits are no anomaly. "Montage" is a far deeper story than its seemingly perfunctory use of tropes implies- a deliberate, and brilliant move on the part of the director. When revelations about the true nature of the crimes start being revealed, previous storyline events that just seemed like clever screenwriting take on an entirely new dimension.

The film's villain, for example, seems for quite some time to just be your typical diabolic puppetmaster, pulling everyone's strings for the sake of twisted personal amusement. This is not (as is implied by the first significant event) to be true. In actuality, the nature of the crimes committed are substantially more evil than that, even though the emotions driving them are about the most positive imaginable. If you haven't seen this film, this combination probably sounds completely impossible.

And yet, fully and beyond any possible doubt, it works. The film is a stirring, profound exploration of why people do horrible things. Hardly anyone leaves this film with their hands perfectly clean. But it's not the blood on your hands that matters. It's the sequence of events that led there, and what follows afterwards. In a world where movie morality is typically determined by whoever has the best ends to justify the means, "Montage" presents moral dilemmas where we know, beyond a shadow of a doubt, who's going to heaven and who's going to hell based not on their literal actions or even their motivation but rather by understanding just how much they have needlessly chosen to damage other people in pursuit of their goals.

There is, suffice to say, a lot of material worth stewing over here. All you need is faith. Every single shot, every single character action, serves a clear deliberate purpose in the overall story. While "Montage" may mislead the viewer to maximize thrills, what we get by the end is worth so much more than that, and is so profoundly effective, that all this misdirection is easily forgiven. That is how strong a portrait this film paints.