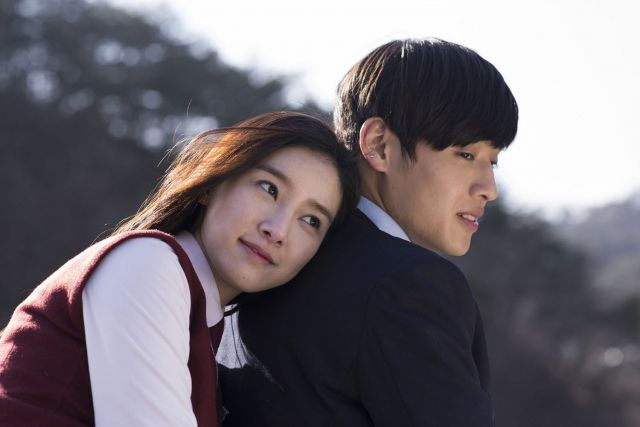 In-soo (played by Kang Ha-neul), try as he might, just can't get used to ghosts freaking him out on a regular basis. His attitude starts shifting when he meets a new one played by Kim So-eun. She's friendly, playful, not terrifying, and best of all, has absolutely no involvement in the greater social system of his new school, which quickly manages to get under In-soo's skin. In-soo is greatly relaxed by the fact that he doesn't have to perform around her, or worry about his attitude being taken the wrong way. But his interactions with the ghost inevitably lead to his getting involved in a more standard horror movie plot, one that meets an unsettling, if relatively predictable end.

"Mourning Grave" is aiming for social commentary. Specifically, it's referencing bullying, and how the lack of public acknowledgment of the existence of the practice is what's causing ghosts to come up from the grave and start murdering their tormentors, for the simple reason that no one else is going to do anything about it. The mystery elements in "Mourning Grave" are particularly odd, because everyone treats In-soo's apparent curiousity with a great deal of rudeness. The population only starts addressing the murders when the body count gets too high to be reasonably ignored.

There's also a healthy cynicism here toward adults. The teachers aren't just oblivious- they actively make the situation worse by sending the clear message that vindictiveness is the best policy, at which point it becomes pretty obvious where the dominant student clique got their ideas about what makes for a healthy social life. The victims here are actually somewhat sympathetic. They do kind of deserve divine retribution, but it's not like anyone was telling them it was a bad idea at the time.

That's the main essential irony of "Mourning Grave". Its main terror isn't the ghosts, but rather the fact that it portrays a culture where the only correct responses are cruelty or apathy. These two sentiments don't exist in isolation from each other either- it's very clearly shown that they enable one another. In-soo's attempts to get involved are indirectly what causes the situation to get worse.

To be clear, this isn't a heroic narrative. In-soo doesn't come into his own and start deciding to do the right thing. Well, he does, but as the ending clearly demonstrates, this isn't really much help when every other character is making a steadfast effort not to learn anything. In-soo chooses to endure the awful horror movie moments because at least he's used to them, and doesn't die because the ghosts don't really want to kill him.

I can wrap this narrative up in all sorts of broader sentiments about what it means to do the right thing, and how bullying is wrong, and at the same these are all broader problems. Honestly, though, "Mourning Grave" doesn't go into any of this stuff with that much depth. For the most part, this is just a scary movie. It's a reasonably tense and frightening movie that does a decent job on its jump scares, and likely worth the price of admission. At the same time, it's not quite so clever as it thinks, and the juxtapositions don't always work out in the best possible way.