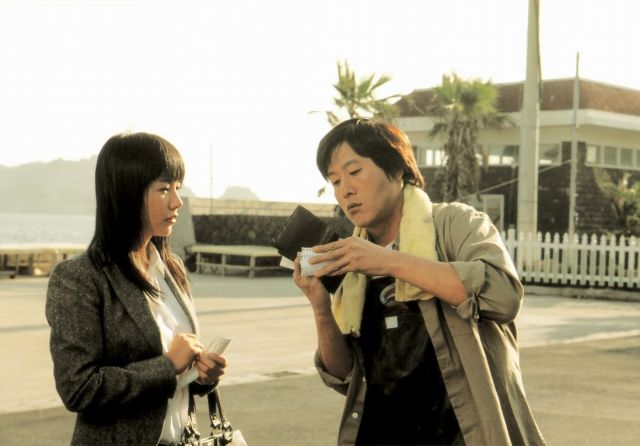 Hye-jin (played by Uhm Jung-hwa) is a tough dentist who knows how to negotiate her way upward through life. Well, at least that's what she thinks. One bad career decision later and Hye-jin is scheming how to best pad her resume on the way to a viable long-term position. And this is how she meets Doo-sik (played by Kim Joo-hyuk), the titular "Mr. Handy" who exists for the sole purpose of solving various problems in a small maritime town. For a fee, of course.

"Mr. Handy" is a fairly typical urban versus rural culture clash comedy that distinguishes itself mainly through subtlety. In the city, Hye-jin is caught off-guard by how little anyone actually likes her. Sure, Hye-jin's personality may not be ideal but she could be worse. By contrast, out in the sticks people are so friendly they practically have to bully her into social activities that do not involve the copious drinking of fine wine.

These are radically different worlds. While initially Hye-jin hates the lack of anonymity in her new home over time it gets to be oddly relaxing, knowing that at any time Doo-sik may leap out of the shadows to rescue her from some random pervert. Hm. When put that way "Mr. Handy" does sound a tad...paternalistic. But couched as it is from Hye-jin's perspective, Doo-sik is just annoying and weird enough to never seem like a knight in shining armor.

That's another one of the curious strengths in "Mr. Handy". While obviously structured like a romantic comedy, director Kang Seok-beom never actually goes that far. Hye-jin has a lousy temper, and is used to trying to solve problems with short-term rage. Her outbursts are rewarding, given all the men she runs into who obviously deserve it. Yet in the long term, it's much more gratifying when Doo-sik swoops in to play the role of concerned friend, actually vindicating Hye-jin as opposed to just validating her.

The sense of humor is fairly offbeat, and is itself vindicated by some fairly straight-faced performances. Uhm Jung-hwa does her usual thing of acting cranky. Kim Joo-hyuk is more interestiung, as no matter what bizarre job Doo-sik shows up doing, Kim Joo-hyuk makes the guy look like a natural extension of the environment. Hye-jin is the interloper, who is in turn attacked by other interlopers, and it's up to Doo-sik to look out for her because hey, she's paying rent.

"Mr. Handy" is a movie about how people can be cool and fun and we should totally be friends with them. It's a very optimistic film when it comes to human nature suggesting, through the character of Doo-sik, that a sufficiently supercompetent person should not use their powers to be a character in an action movie. Just being the cool guy around the neighborhood is enough and there's probably one such person in your neighborhood too. Remember the cool helpful guys in your life, and appreciate them. They don't need it, but you'll end up feeling more human in the process.