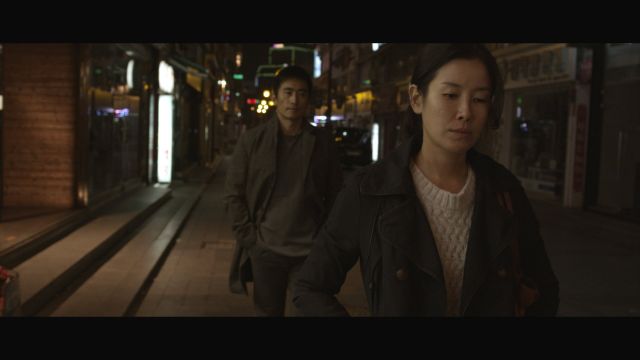 I-cheon (played by Lee Suk-chul) is a fairly typical surly teenager. He's rude to everyone, including his younger brother Yoo-cheon (played by Jo Wang-byul). The opening portion of "My Boy" immerses the viewer in this adolescent environment. I-cheon isn't a particularly likable young man. He doesn't even have any kind of rebellious charm. The older boy's just a jerk in the making, and there's no apparent impetus to help him change his attitude. Just the awkwardness of everyday life.

Then Yoo-cheon gets sick, and I-cheon's angry, disaffected attitude takes a troubling turn. His life is no less purposeless. There's still no hope on the horizon to change I-cheon's attitude. There's no silver lining behind Yoo-cheon's sickness. All I-cheon has to look forward to is the agony of knowing that any time his brother could die, and be gone forever. And if that time comes, all I-cheon will have left are the memories of his inconsiderate rudeness.

There's also the storyline of their mother (played by Lee Tae-ran), and the family friend who helps her out (played by Cha In-pyo). To be honest I had trouble focusing on this part of the story. Maybe it was just the quality of the performances, but the context just didn't seem all that compelling. A mother who's on the verge of losing her son is a tragic thing, and her circumstances are bad- but then, her love is never in question.

I-cheon is a different matter entirely. He wanders around the cityscape aimlessly, motivated only by desperation. The young man wants to feel empathy and love, and realizes that his best chance for that is now slipping away. Lee Suk-chul gives an excellent performance of a young man who's trying to be a caring person but genuinely has no idea what that means.

Director Jeon Kyu-hwan does excellent work forcing us wise adults into the rather limited world and options of I-cheon. At one point ruffians steal Yoo-cheon's wheelchair. Nothing too gruesome happens, but I-cheon has to solve the problem the only way he knows how. It's not just a matter of I-cheon being relatively ignorant. The guy has no friends. When he first becomes aware of the crisis his life has been thrust into, he has to receive counsel from a man who literally can't even understand the sobbing young man.

The essentially tragic undertones of the entire scenario in "My Boy" are clearly telegraphed right until the end, when Yoo-cheon's ultimate fate is finally revealed. I-cheon's reaction is that same blend of teen spirit that we'd seen throughout the entire movie. The kid has energy, passion, and nowhere to aim it. And now that he does...well, amazingly enough, even reaching the cliche of artistic potential does the young man no good at all. Far from reaching the zenith of romantic inspiration, I-cheon only has an outflow of emotion that he can't aim in a useful way. That's the trouble with life- it never feels as much like art as the critics would like us to believe.