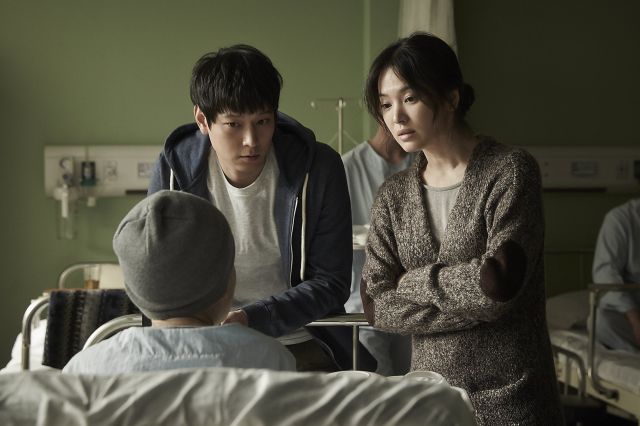 Ah-reum (played by Jo Sung-mok with some excellent make-up work) is dying of old age even though he's only sixteen years old. Ah-reum has progeria, his days are numbered and, well, that's the movie. Also of relevance- his parents Dae-soo (played by Gang Dong-won) and Mi-ra (played by Song Hye-kyo) are both fairly young. Both of them are in their early thirties, having had Ah-reum when they were still high school students.

So, teen pregnancy and a debilitating illness in the same movie, huh. At first glance "My Brilliant Life" looks like it's going to be deliberately manipulative, weepy stuff. And it is, don't get me wrong, but there's quite a bit more going on here than that. A television documentary featuring Ah-reum takes on large storyline relevance- everyone here is fully aware of the way their stories look to the outside world, and that it's being manipulated for the sake of emotional impact. And Ah-reum, too, realizes that he's a victim of this through the course of writing a romantic story about the summer where his parents conceived him.

Where "My Brilliant Life" really shines is where it ultimately provides a compelling argument for romanticization. That much is clear from the beginning- Ah-reum will die young and tragically. Literally speaking his death will be meaningless. But the same could be said for the rest of us. Ah-reum's melodramatic circumstances don't make him special. Rather, it's the way he chooses to live out his final days and simply embrace the story of his life, regardless of whether or not it's particularly truthy.

This commentary from the observer's perspective takes on particular odd undertones with subplots involving the way other characters attempt to use Ah-reum's story for their own ends. In the case of Mr. Jang (played by Baek Il-sub), the association is mostly harmless. The guy just wants to show off to his dad that he's on TV, and it's clear that Mr. Jang has a genuine sentimental rapport with Ah-reum.

Everyone else though, from the spiritual do-gooders to the documentary crew to the aspiring film writer, are all mostly hung up on what Ah-reum's story could mean for them. And even if everybody means well, Ah-reum is still left suffering. It's not a very serious suffering- that much needs to be emphasized. Even as Ah-reum apparently gets his fantasies crushed, it's just one quiet moment of weeping and then it's time to move on, one step closer to the grand finale where he can truly say thanks to his parents for choosing, against all logic and reason, to bring him into the world.

The world is a sad place. Ah-reum recognizes that even though the progeria makes him seem special, everyone suffers through their own problems in life. Whether it be Dae-soo's arrested development or Mi-ra's mild irritation at the antics of her unusual family, his parents had to make sacrifices for him. More dreams are lost than gained in "My Brilliant Life", but that's OK. It's the love that we feel in the moment that really matters, and director Lee Jae-yong does excellent work getting that across.