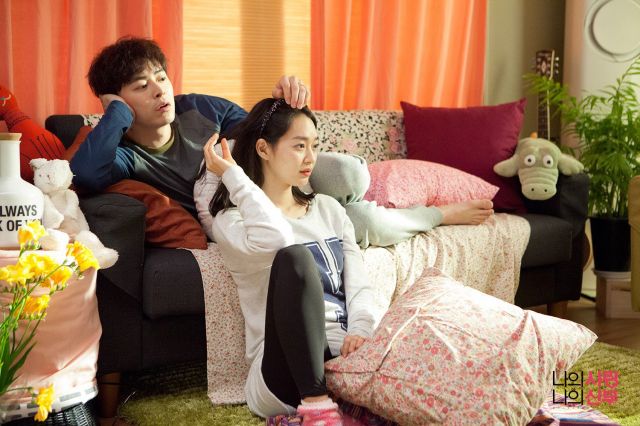 Yeong-min (played by Jo Jung-suk) and Mi-yeong (played by Shin Min-ah) are a married couple. That's the movie. No, really, there's almost no overarching conflict. They just fight alot. But on the flipside, they spend equally as much time demonstrating sweet, genuine affection to one another. And I don't mean grand romantic gestures here. It's the little things, like the apologies, the managing of chores, the sweeping reassurances when the other person is clearly upset. You know, the things that actually matter in a serious relationship.

Well, maybe you don't know. It certainly isn't the kind of subject matter the movies like to show us about love. But "My Love, My Bride - 2014" isn't about aping any obvious film trend, its status as a remake notwithstanding. Just as Yeong-min and Mi-yeong comfort each other, the movie makes a point of telling us in the audience that, you know, it's OK for the honeymoon period to end. It's OK to restlessly think about men/women aside from your partner. It's OK to fight. Because you have a connection that goes deeper than that.

The mental link between Yeong-min and Mi-yeong manifests in some pretty surprising places, too. At one point the story veers dangerously close to cheating, only to be suddenly broken up by a surprise reflex. It is an excellent reflex by the way. Seriously, that's a very good habit to get into with your significant other if only because it could defuse a mistake that would haunt you for the rest of your life.

But "My Love, My Bride - 2014" isn't just about messaging to married couples. It's a fairly funny film in its own right just because it has so much humor about the entire concept. Even in their most agonized states, Yeong-min and Mi-yeong's problems are just so comically mundane. They'll vent to their friends and family every so often, but at the end of the day of course they're just going to go back home to each other, because they love each other. It's really not that complicated.

In this way the lack of a definite narrative structure is very much the movie's greatest strength. For the most part the story is told in vignettes, and this excellently reflects the general flow of married life. Even when a late misunderstanding threatens to destroy everything, by this point the viewer has come to see it as the natural extension of the fighting we've seen all along. It's precisely because these two are used to the normal bustle of conflict that they're unable to realize that their partner is in serious pain.

All of this works to make "My Love, My Bride - 2014" an enormously sweet, lovely movie that inspires quite a bit of faith in the institution of marriage with the help of jokes. It's the kind of fluffy entertainment I can heartily recommend to someone who wants to watch something that's just so delightfully simple and relatable. No big ethical questions about the human condition here- sometimes even poetry is just a matter of personal expression. And you know, that's OK too.

"My Love, My Bride - 2014" is directed by Lim Chan-sang and features Jo Jung-suk and Shin Min-ah.

"[HanCinema's Film Review] "My Love, My Bride - 2014""
by HanCinema is licensed under a Creative Commons Attribution-Share Alike 3.0 Unported License.