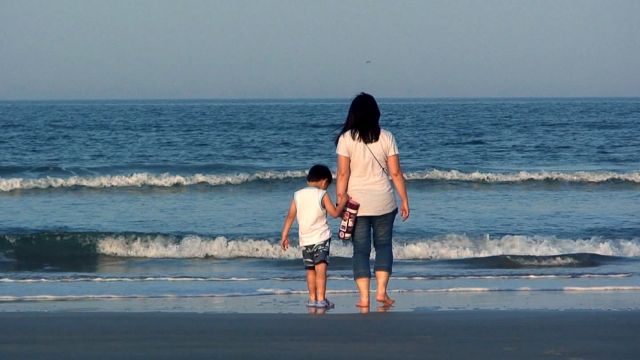 Single motherhood is one of those popular social wedge issues- often used as a sort of statement on how Western cultures are superior to Asian ones, as single motherhood is largely accepted as a social norm in Western societies, but is more stigmatized in Asian ones. Director Emmanuel Moonchil Park had spent quite a bit of time in both cultures. So naturally, when his sister came home from Canada, pregnant from her boyfriend after a relationship fallout neither of them are willing to discuss on camera, he thought this would be a rife topic for social commentary.

And it is, sort of. Just not at all in the way Emmanuel Moonchil Park had intended when he first started filming. I'd like for you to take a moment to think about your own acquaintances in life, particularly the single parents. Now, concerning this individual, who you know personally, do you believe it would be fair to say that their experiences (be they positive or negative) are a reasonable representation of the institution of single parenthood as a whole, or are they a commentary more on who this person is, as an individual, the choices they made that led them to and are keeping them involved as single parents?

"My Place" is an intensely personal film. I don't mean that just literally- to be sure, Emmanuel Moonchil Park's documentary is very in-depth about his family's history and private life. More significantly, the vague pretensions he starts out with on making a social issue film, which gradually morph into something deeper and far more moving, create a forceful statement whereby the viewer has to identify with the family, not as statistics or statistical outliers, but as actual human beings who can make mistakes and can make up for them. All of this is contingent on individual force of will and motivation.

Indeed, even general societal observations are of dubious value. At one point, Emmanuel Moonchil Park addresses his father with a question about how things might have been different in the good old days. The older man guffaws at his son's assumptions. Yes, the father is concerned about his daughter choosing to be an unwed mother. This is because he's worried that she lacks the sense of personal responsibility necessary to actually follow through on the task of properly raising another human being.

That's the beauty inherent in "My Place", though, is that these apprehensions aren't based on societal archetypes, but on who the members of this family are as people. This is something we forget about all too often in the West- being supportive, and positive, and politically correct are seen as the absolute essentials when dealing with any potential touchy subject. But it's only through a serious sense of reality that Emmanuel Moonchil Park's family is able to properly care for the newest member of their family. It's this essential factor of family, more than any cultural ideology, that's what really matters.

The documentary also has sprinkled bits of criticism about Korean society- but this is no polemic film. The title conveys a strong feeling of finding, specifically "My Place"- the place for me. Maybe it involves defying social conventions, making good with the family, or taking advantage of different legal and social structures in multiple different countries. Wherever "My Place" may be, it has to be something personally, emotionally desired on a level that goes beyond the mere expectation of unconditional love. It's a heartfelt message, and one so worth hearing that I really must recommend this film in the strongest possible terms.

"My Place" is directed by Emmanuel Moonchil Park. It will be screened with English subtitles at the Chuseok Film Festival on September 18th at the Art Nine theater in Seoul.