[HanCinema's Film Review] "My Way" or The High Way? 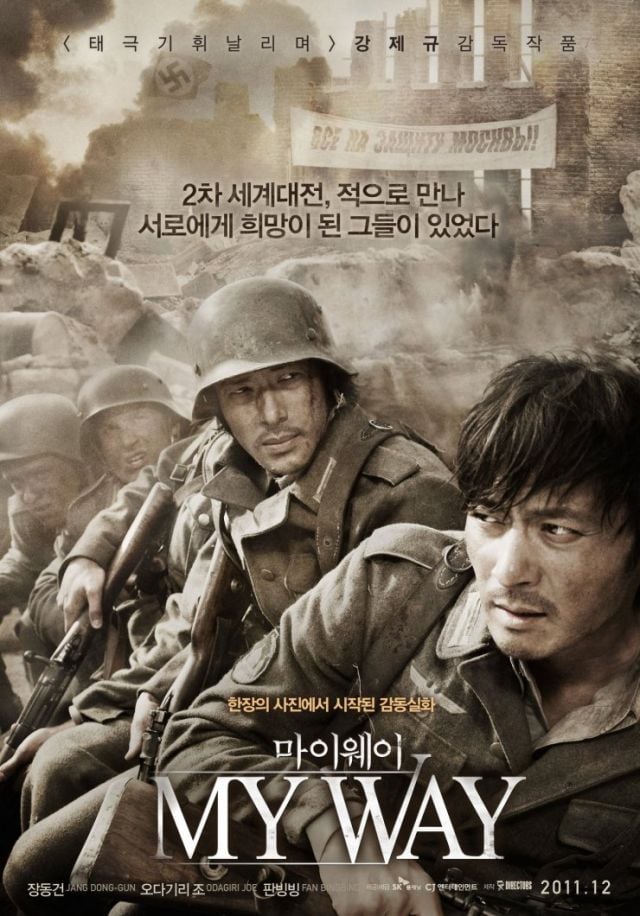 With a production budget of about KRW 28 billion (US$24 million), Kang Je-gyu's "My Way" marks not only his first in seven years but it is most expensive Korean film ever made. The film was originally going to be Kang's first foreign feature film but Kang decline Warner Brothers' investment proposal and, instead, accepted the support of SK Telecom and CJ E&M's film business division to put up the bulk of capital required. With its international cast and wildly epic scope, "My Way" is a shell shocking thrill ride that examines the futility of war through the relationship of two unlikely friends.

The story is that which has become legend. During WWII four Asians in Wehrmacht uniforms were found on Utah beach after the D-Day invasions. How they got there is a fascinating and heartening tale that was explored in the 2005 documentary by SBS entitled "The Korean of Normandy". The film states in the beginning that it is based on actual events but of course there was a lot of creative freedoms taken. Kang chooses to tell this story through the birth of an unlikely friendship between Joon-sik (an impoverished Korean runner played by Jang Dong-gun) and his Japanese rival and superior (Tatsuo played by Joe Odagiri). After a riot, due to Tatsuo being unjustly declared the winner of an Olympic try-out marathon, Joon-sik and a few of his friends are forcefully drafted into Japanese army. From there the journey to the beaches of Normandy begins as the two are passed between powers like pawns on a vicious and unforgiving chessboard. The scope here is truly massive and after the film's 137min you will feel as if you yourself had taken that journey. Leaving you both exhausted, emotional numb, and shell shocked to say the least.

The length of the film did cause me to raise an eyebrow as I proceeded with caution into the cinema. After the film had run its course it was not the actual time it took for Kang to tell his story that I then questioned, but the unrelenting and brutal pace at which the story progressed. The transition between scenes allowed very little in the way of rest bite. With the action being as emotional and visual intoxicating as it was, it might take you a while until the tinnitus simmers down and you awaken from the demanding dreamscape Kang puts forth. It's a hard-hitting ride that drags you along, mirroring our heroes' journey, but perhaps these transitions could have been smoothed out and tempered to a degree.

With such a film the balance between the scope of events and the weight given to each of them is vital. Although this does tie into issues with the length, I also found that a number of story and plot elements could have been done away with or approached in a different light. The first 40 minutes of the film's set-up felt appropriate but in retrospect that time could have been redistributed to other areas of the film. They served their propose well but as the film ticks over you might find yourself wishing for a moment or two of reflection amidst the madness and mayhem. Transitions were my biggest gripe as the cuts that divided Joon-sik's journey failed to soften and easy the passage. Besides one scene, involving a long train ride and the classic plotting its path on a map, there was little to suggest the passage of time and the change of space. Sure the magic of cinema did its work and the illusion was maintained, but emotionally I struggled to internalise the dramatics of certain scenes and the impact they should have had on events to follow.

"My Way" earns its worth with its visuals. Its massive budget shows from the early street shots and costumes of Korea during the 1930's to Kang's gorgeous rendition of the D-Day landing. The special effects and general cinematography is solid and the contrast between the film's many locations is palpable. The Russian P.O.W camp was especially brutal as the unimaginable coldness of the camp permeated through the frame. There were also a number of imaginative camera shots that were tactfully used and worked well to heighten the tension instead of distracting from it. Jang's film has a visual delight and it is the film's  biggest plus for me.

The acting in the film was satisfactory. Jang Dong-gun's performance never faulted

but his rigid consistency seemed at odds with the epic journey he was taking across Asian and Europe. On the other hand, Joe Odagiri's character allows him to play a character that was transformed over the course of the film. There needed to be more of human crack in Jang's character, something that broke him and allowed him to rise again. The events he and his friend suffered are simply beyond the average persons comprehension, and the pure tenacity he ploughed through it all with made me less empathetic and caused me to distance myself from him. The supporting cast also carried their weight well as a number of lesser characters stood out and perhaps added the human aspect I was looking for in our hero. The sadness and sympathy I felt in felt was directed more towards these characters than the two friends I was supposed to identify with. Characters such as Sirai (played by Fan Bingbing) ultimately felt unnecessary. Its unfortunate to say but the role of foreign female sniper seems to have become a cold and stale motif in Korean war films and her role in "My Way" added little to the experience. The acting itself cannot really be faulted by there are questions to be raised about certain characters' inclusion and the emotional weight they were asked to carry in the film.

"My Way" was a big pill to swallow and I would have preferred it to come in an easier, more digestible, dose. Its epic scale and grand story had "Kang Je-gyu" written all over it but the linking of events was rough and made for hard viewing. The millions of dollars shined as Kang's team did a fantastic job at bringing this mammoth task onto the big screen. It's a heart-thumping spectacle that will numb your senses as you wait to exhale, and a second viewing would almost be as cruel as the asking that lone Korean soldier on the beach of Utah to relive his experience.