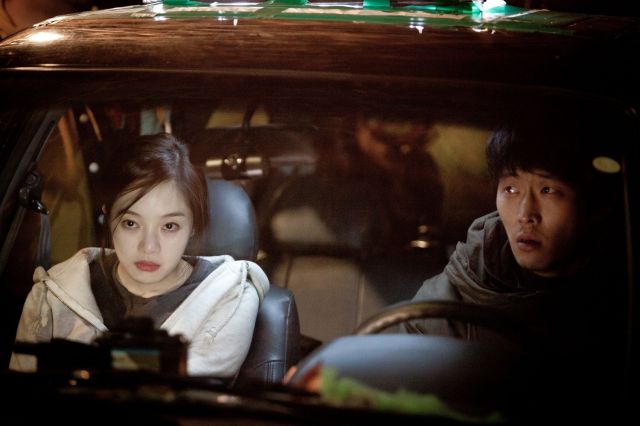 This movie is all about standard horror movie staples. Unlikable young people who spend just enough time being obnoxious that we in the audience want to see them die horribly? Check. A malicious supernatural presence whose reason for being is never clearly explained? Check. Camerawork that implies everything we're seeing was actually filmed by either one of the main characters or some other camera that happened to be nearby? Check.

Actually, let's explore that last one for a minute, bcause the extensive use of oddly positioned cameras is the main intriguing hook and gimmick of "Navigation". We get quite a bit of variety from a relatively limited prompt. There's the camcorder one character insisted on taking along on these adventures, the black box of the car, CCTV footage of various random areas and, most significantly, the camera attached to the GPS system that the characters scavenge from a car wreck.

Yeah, I should probably note that this gang of three aren't typical arrogant movie teens. They're actively unlikable, a fact all the more remarkable considering that most of the camerawork is from their point of view. What kind of a person is not only so self-centered as to think that their random misadventures are worth documenting, but even regard it as a point of pride that they've found a fully functional navigation system from a car wreck that's obviously resulted in the death of the previous owners?

Why, today's messed up youth no doubt. For all its standard horror movie trappings, "Navigation" is primarily a criticism of youth culture, specifically its obsession with cameras as meaningful instruments when in reality there's only so much they can document. In the car the sense of terror is palpable. But going from official CCTV evidence, it's never clear why our main characters are freaking out so much. It takes them a ridiculously long time to grasp that maybe it's the technology that's the problem rather than the supernatural stuff they know so little about.

The sense of horror is excellent, by the way. It takes a while to get there- "Navigation" spends a tad too much time establishing how basically unsympathetic its leads are. But once the movie gets rolling the scares are fast, shocking, and legitimate. The arrogance that typified the leads' behavior early on is the same element that makes it so difficult for them to escape the horror later on. It's freaky stuff that works best with the lights turned out- not that a brightly lit background is much help later on.

I don't want to oversell "Navigation" too much. The character development is limited and the reliance on stock tropes is obvious, even if found footage horror is a relatively recent trend. Regardless, the movie does an excellent job avoiding some of the more obvious logisticial questions of the genre (why are they still filming?), giving us a cramped environment which the characters inexplicably see as more safe than the wide open space that is so omnipresent. As horror metaphors go, that's a pretty good one.