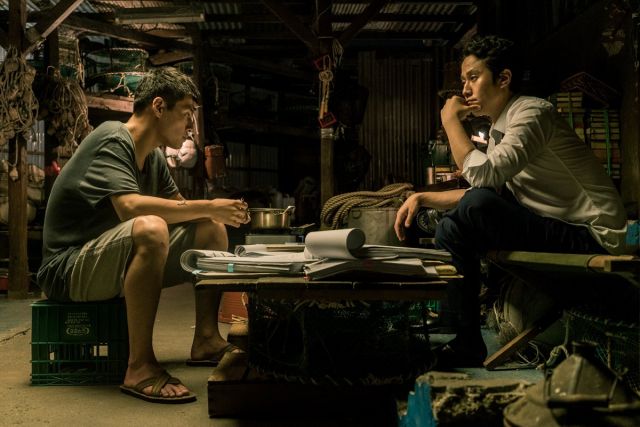 Back in the year 2000, Hyeon-woo (played by Kang Ha-neul) was once a normal idiot kid who rode his motorcycle in an unsafe fashion. One accident later, Hyeon-woo is called to account for evidence found during a questionable search. In the modern day, Joon-yeong (played by Jung Woo) is an attorney who has the bad habit of making enemies pretty much everywhere he goes. Joon-yeong gets the chance to be constructive when he's handed Hyeon-woo's case.

"New Trial" bears a lot of structural similarities to "The Attorney". The most pressing difference is the change in timeframe. Whereas injustice in "The Attorney" could be easily blamed on the eighties South Korean dictatorship, it's much harder to apply that logic to the case of Hyeon-woo, who was tortured and bullied into a false confession under the auspices of democracy. Worse, Hyeon-woo has languished in jail since then, only finding hope because Joon-yeong is such a rebel.

And that really needs to be emphasized- Joon-yeong is a genuinely unpleasant person to be around. He's not at all likable. What at first seems like slander against the real Joon-yeong actually ends up being a kind of a compliment. An essential moral point made by "New Trial" is that the charming likable people are the ones we need to watch for. They're the ones who will gladly sell out any pretense of justice for the sake of their personal reputations.

Consider detective Cheol-gi (played by Han Jae-young), the obvious villain, even moreso than the actual murderer. Cheol-gi goes after Hyeon-woo as a matter of convenience, since Hyeon-woo is the most conveniently located suspect. Cheol-gi is a thug and a bully who obviously became a detective for the power trip. Yet he's still a cop in the present day. Why? Because admitting that the government collared the wrong guy for a horrible murder could hurt someone's career.

That's the double-edged sword of democracy, and why it's foolhardy to assume that any criminal justice system operating under that form of government is any purer than anyone else's. It's only thanks to men like Joon-yeong, who are willing to ruffle feathers, that a better world can be maintained. Justice is a continuing effort, not a closing statement. This is explicitly outlined in the final text, which notes that the real-life Joon-yeong has made pursuing retrials the benchmark of his entire career.

That's really a lesson in and of itself. What makes Hyeon-woo's story noteworthy is not that he was a victim of government-sponsored injustice. It's that by sheer dumb luck he happened to be the first such case that Joon-yeong ran into, and as it turns out, there's plenty more where Hyeon-woo came from. Beyond all this theming "New Trial" is just a standard boilerplate investigative drama, focus being on the personalities involved rather than action scenes or epic scale. But wow, that theming really is something! The closing shot of "New Trial" is quite literally the beginning of Hyeon-woo's trial. We never actually get to see it. We don't need to either, because that's not the important part of the story.