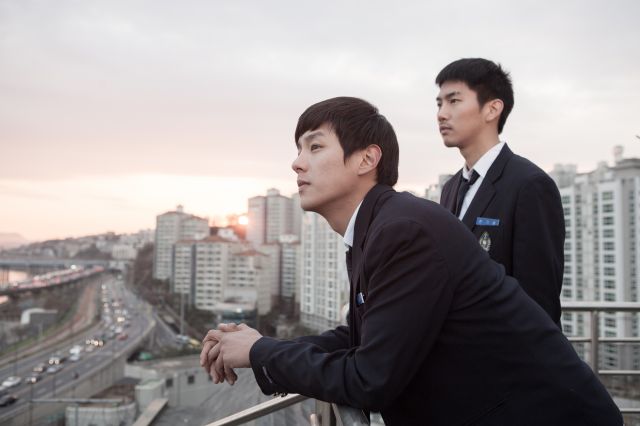 As with many high school movies, this one has a gang in it. The leader's name is Gi-woong (played by Lee Jae-joon), a boy who is very good at fighting. In fact, practically every single interpersonal encounter the guy ever has results in violence somehow. As main characters go he's not exactly an enthralling one. Personally, after the first time somebody responds to my attempts to chat with actual physical disrespect, I'd just as soon not talk to that person at all, ever, if it can be avoided.

Ah, but Yong-joo (played by Kwak Si-yang) is no ordinary person who can just take no for an answer. He continually attempts to engage Gi-woong in personal rapport, and it isn't until some time into the movie that we get a clear reason why. Yong-joo and Gi-woong once knew each other long ago, as we see in limited flashbacks that don't actually give us that much information about why Yong-joo is obsessed with Gi-woong in the present.

As for that motivation, well, Yong-joo is gay. This is not the helpful context I was hoping for, because even granting that Yong-joo is gay, this doesn't change the fact that he is both insane and stupid for continuing to push for a relationship here against an obviously abusive and probably not even homosexual opposite. Change Yong-joo into a girl and the problems with "Night Flight" immediately become painfully obvious.

But let's say for the sake of argument that "Night Flight" is intrinsically about homosexuality and discrimination and not a love story. Even in this case the basic idiocy inherent in Yong-joo's character badly undermines any attempt to sell his situation sympathetically. A late scene shows that Yong-joo has actually prepared for a confrontation with possible attackers, yet inexplicably throws away his sole means of self defense for no apparent reason.

I guess this is because the soft, submissive gay kids who don't know anything about hand to hand combat should rely on the violent aggressive ones that do? That's not really much of a moral, especially considering that the story is more about generic bullying and the gay element barely factors into any of this at all. It's just a sort of sudden gasp of unexpected flavor that's ultimately kind of irrelevant. Perhaps it's possible to view the film as an interconnected patchwork of a large number of social issues- the trouble is that however the story is dressed up, at the core, it's just kind of dumb.

This film is nearly two and a half hours long, and I'm genuinely not sure what it does with all this time given how long it takes for the major revelation and betrayal to happen. "Night Flight" is all backdrop- while it does have a tinge of realism to the characters this mainly serves as an unfunny reminder that back in high school we were all basically terrible, stupid people. It's not a feeling that can be easily related to except in the sense that we shouldn't have done that stuff- and "Night Flight" is no "18 - Eighteen Noir" in the introspective department. This film is for the operatic teen gay drama fan only.