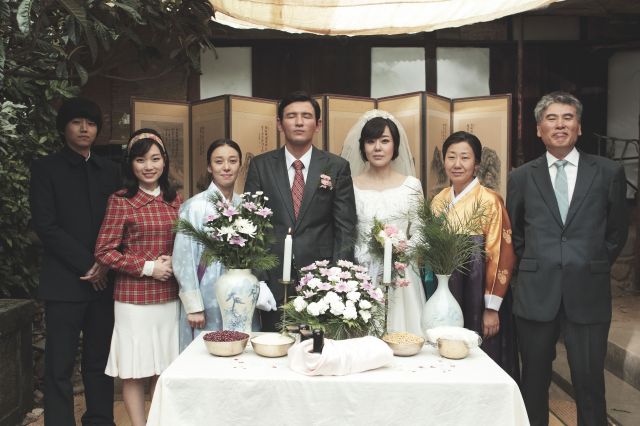 Deok-soo (played by Hwang Jung-min) is an old man living in Busan who's been through a lot. His life begins with the Chinese counter-offensive in the Korean war. Director JK Youn doesn't just give us an eyeload of brutal spectacle here. There's also the very real sense of fear. It's obvious from the context of Deok-soo's flashback that something tragic will happen, but at the same time, there are so many people in this scene in such dire straits that it's difficult to escape the feeling that tragedy is just in the inevitable surge of bad luck that comes from life.

Han, to put it more simply. For those of you who consider the concept of han to be quintessentially undefinable, "Ode to My Father" gives a pretty good crash course. Deok-soo's story is loaded with rather gloomy bulletin points. It's the face of South Korea's industrialization from the vantage point of one of the little guys who had to work his way up to being...a shopkeeper. Yeah, not really much of a rags-to-riches story. You could probably find plenty of old guys like Deok-soo right out in the street.

This is, in fact, the whole point. While technically "Ode to My Father" is just the story of Deok-soo, the sheer quantity of characters on-screen, even if most of them are just extras, really sell how pretty much everybody in the country was stuck in the same spot of trying to crawl their way into a respectable life station. More significantly, though, even Deok-soo's victories come off less as a result of the dynamic nature of his character as they do this constant sense of struggle to try and do the right thing.

The sense of ethics in "Ode to My Father" is also very strong, as well as the way all this relates to the broader human condition. Even by the seventies the living situation in Korea had substantially improved, and at this point Deok-soo runs into an obvious parallel with his own escape from the ravages of war. Note the way Hwang Jung-min reacts to the situation- or more specifically, how he doesn't have any sort of amazing epiphany. While Deok-soo grumbles, ultimately, his only option is to do the right thing.

But "Ode to My Father" isn't just a historical travelogue of what life has been like for the average Korean in the international era. There's doses of comedy to match up with the greater tragedy of the human condition. My favorite scene was when Deok-soo unexpectedly reencounters a friend from the old days. Well, not really the old days. The whole joke of the scene is that Deok-soo has completely failed to grasp why this person is meeting him again even though from his perspective the reason should be pretty obvious.

Another reencounter is, well, more traditionally heartbreaking. And that's the sense of humility the film ultimately leaves us with. Somehow it's hard to remember that older people once, long ago, had their own parents, and like us had to think of themselves as being a product of this history, trying to live up to the dreams of their forefathers. Well, "Ode to My Father" gives us a refresher on that point too. And it proves to be exactly the kind of statement of general humanity that a spectacle like this really needs to carry the day emotionally.

"[HanCinema's Film Review] "Ode to My Father""
by HanCinema is licensed under a Creative Commons Attribution-Share Alike 3.0 Unported License.