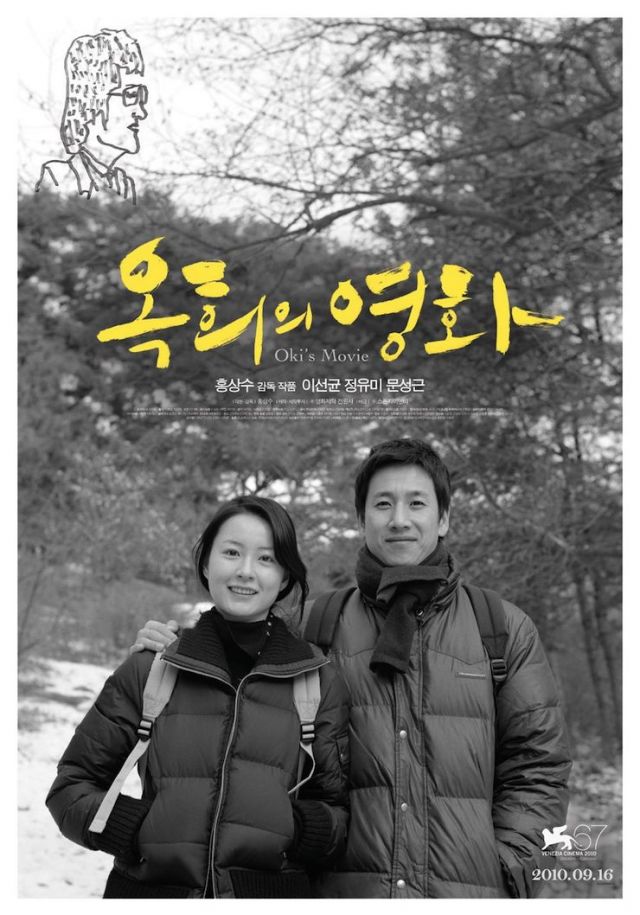 Hong Sang-soo seems to me to be an acquired taste. I'll admit that I am still fully familiarising myself with his filmography but I do believe that Hong's style and approach to this film will alienate some movie goers. His latest work, "Oki's Movie", was release in 2010, along with Hong's "Ha Ha Ha", and it will not appeal to everyone.

The film is comprised of four short stories centring around three main characters at a university. The first, entitled "A Day for Incantation" contains some very awkward and humorous moments pivoting around the young and struggling filmmaker Jin-goo (Lee Sun-kyun from "Petty Romance" and "Paju"). I am a strong believer in the "primacy effect" in films and this opening short story put the film in positive light. I cringed as Jin-goo was caught off guard by a student's personal assault on him during a Q & A after his film. Hong's uninterrupted shots really pushed home the tense and unavoidable conflict in the scene. There are no comforting cut-a-ways or a change of angle, things are as they are and we are forced to absorb every last second of it-whether we like it not.

Bong's documentary style aesthetic in the film plays to his sense of cinema as an auteur. Scenes are presented with such minimalism; it's almost the equivalent of not being able to blink for an extended period as the shots persist on screen. At times I was impressed by its affect on specific scenes, but this appreciation came after the fact. The moment I became full aware of it was the moment I was yanked from the spectacle. The magic was broken and with each scene thereafter I felt my attention drawn to this aesthetic choice rather than the events themselves. It is this disruption of my suspension of disbelief, as well the film's fuzzy internal logic, that made me question my enjoyment of the film as a whole.

The final chapter, also called "Oki's Movie", swung the film back into more favourable territory for me. I found the narrative and events to be fascinating to watch and it gave much needed weight to Oki's character (played quite brilliantly by Jung Yu-mi from "Good Morning President", "Come, Closer", and "A Bittersweet Life"). While it did provide some interesting characterisations and layers to the preceding shorts, it was not enough to place film in its entirety on solid ground.

Hong Sang-soo moves around in his own back yard with "Oki's Movie". His personal watermark is burnt on the celluloid but this postmodern drama just wasn't stitched tight enough for my liking. Each of the four short stories had something that really grabbed me but the metanarrative sagged, as the film became a victim of its own intentions.